What If Things Don't Work Out For The Good? 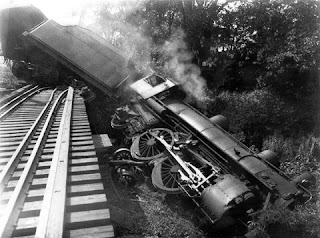 We want to act for good.

All actions, however, have unpredictable or uncertain outcomes.  We can never be sure of what is going to happen.

“Hang on,” I hear from various quarters, “we do know what will happen – we’ll bring about a better world.”

Therein lies our delusion.  Western notions of linearity, of cause-and-effect, of predictable outcomes, give rise to delusions of permanence and security.

Ever since the Age of Enlightenment (or Reason) we have come to believe that the world and everything in it is permanent.  Even change is permanent in the sense that change happens in a predictable, understandable, consistent, and controllable manner.  We have come to view change like a train moving along a railway track.  When the train comes to a junction we can flip the switch one way or another.  Flip it one way and the train continues along in the one direction.  Flip it another way and the train changes tracks and moves off in a different direction.  Our scientific approach was based on this assumption.  Eventually our cultural and social understandings took up this assumption also.  This consistent permanence provided us with the security of surety and certainty.

But, it is a myth; it is an unfounded assumption; it is a delusion.

The world does not work this way.  The train may end up as a wreck.  Indigenous cultures and eastern philosophies have known this for millennia.  Western science has come to realise this delusion over the past century or so, especially with the development of quantum physics, meteorology, and systems, chaos, and complexity theories.

Socially however, we have been slow to catch on.  We still tend to think that if we act for good then good will happen.  What if it doesn’t?  What if unwelcome, or harmful, outcomes arise because of our actions?

What do we do then?  Do we become despondent; do we collapse in despair; do we give up and withdraw?

No!  We continue to act, but accept that our actions may or may not have the outcomes we would like.  Alan Clements1puts it well when he says,


“We must live with the anxiety of an unpredictable world, where the unthinkable often happens.”

So, notwithstanding that we know it must change, and we know that outcomes are unpredictable, we continue to act.

One person who knew that we must continue to act for good, no matter the outcomes, was Vaclav Havel, the last president of Czechoslovakia and then the first president of the Czech Republic.  Havel was a vocal critic of the communist regime, an advocate of direct democracy, an environmentalist and humanitarian as well as being a poet, philosopher and writer.  He was jailed numerous times by the secret police, before finally leading his country to a new phase.  In one of his books, he declared that,2


“Hope, in the deep and meaningful sense … is an ability to work for something because it is good, not just because it stands a chance to succeed.”

The key, then, to finding the justification for our action is in the act itself and not become attached to the outcome.  We learn to accept.  Acceptance in this sense means that we must transcend our ego.  We must go beyond an egocentric thinking that says “I can control the future.”  Another poet, T S Eliot, alluded to this letting go of attachment in his poem East Coker:3


“For us, there is only the trying.  The rest is not our business.”