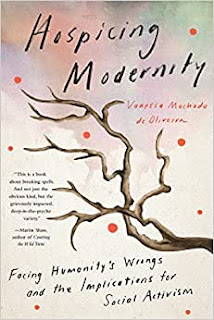 How do you review (let alone, read) a book that spends 12 of the first 40 pages warning you off reading it? Yes, Hospicing Modernity, by Vanessa Machado de Oliveira, is one such book.1

Vanessa Machado de Oliveira is right to make this buyer beware warning. This is not an easy book to read. Indeed, it is uncomfortable reading.

Little wonder. For, as Vanessa Machado de Oliveira tells us, “Modernity conditions us to avoid, escape, or want to be rescued from discomfort…”

(Before continuing, there is one further caveat that may be worth considering. If you are a reader who wishes to change the world, then after you have read this, you may want to do so in a totally different way than you were before reading it. That is, if you wish to change the world at all – you have been warned!)

So, let go of your desire for comfort, disregard what you thought of social/environmental change, and allow Vanessa Machado de Oliveira’s experience, knowledge, and wisdom guide you through some thought experiments and exercises that will leave you questioning not only the system we are trapped within, but also your own self.

Modernity does trap us.

Vanessa Machado de Oliveira’s gift to us in this book is to make the bars, the padlocks, and the security cameras, of this trap visible.

But, once visible, what do we do?

This is where the title of the book is significant. Consider a hospice. Most often it is a place in which those who are dying are cared for and supported through their dying. It is not a place for healing. So it is with modernity. Vanessa Machado de Oliveira warns us against wanting to fix, reform, or otherwise solve a set of problems. Modernity is a predicament, not a problem (nor even a set of problems.) Problems potentially have solutions. Predicaments do not, only an outcome – which we are unable to predict or plan for.

Indeed, trying to fix problems, and find solutions is, she says, part of the very nature of modernity itself.

Vanessa Machado de Oliveira suggests that modernity is in its dying stages and as such, the best we can do is to offer our hospicing skills. Sounds easy, doesn’t it? Not so, as we are part and parcel of the very thing that is dying.

But Vanessa Machado de Oliveira does not leave us floundering or grasping at some forlorn hope. She counsels us that, “Whatever happens ‘then’ (the future) depends more on the quality of relationships in the ‘now’ than on the accuracy or appeal of images of the future that one projects as a way forward.”

The journey between the ‘now’ and the ‘then’ will be a difficult and uncomfortable one, and we will not even know where we will end up – or even, if we will end up. However, the  thought experiments and exercises that Vanessa Machado de Oliveira offers us throughout the book at least make the journey possible, albeit uncomfortable.

Get ready to overcome (if you can) the six C’s that Vanessa Machado de Oliveira associates with our ego-logical desires of modernity – comfort, convenience, consumption, certainty, control, and coherence.

Overcome also the warnings given early in the book and read this important addition to the understanding of our times.

Heed also one more warning the author imparts: “I cannot say ‘I hope you enjoy reading this book.’” It may change you though, or at least change the way you perceive modernity.