Hi, I'm going to have a short break for a few weeks.  Will be back with a weekly blog devoted to community development, social justice and sustainability around mid-late January 2015.
Thanks for reading during the past year.
Bruce
Posted by bruce meder at 16:25 No comments:

This Changes Everything: A Review

It sure does.  Change everything, that is.  Naomi Klein’s latest book is aptly titled.  Climate change changes everything and everyone.  No nation, no community, no individual is immune to the effects of climate change.  Even those who deny climate change are not immune.

The subtitle of the book is Capitalism vs the Climate – again apt.  it could just as easily have been Everything you always wanted to know about climate change.  Klein set herself a mammoth task in writing this book, and largely, she has succeeded.  She covers the science, the politics, the history, the roles of Big Oil, Big Coal and Big Green.

She introduces us to the Heartland Institute of climate change deniers at their conference in Washington.  She takes us to indigenous communities in Canada, South America and the Ogoni living in the Niger Delta.

We get glimpses of the boardrooms of big companies such as Chevron, BP and Exxon Mobil.  We see the communities offering alternatives, from the solar project of the Cheyenne in South Dakota to the citizens of towns and cities in Germany taking back control over their power supply.

Klein has researched and written this book over a period of five years – and it shows.  It is thoroughly researched, meticulously documented and superbly written.

All of the history and science is fascinating, yet Klein’s major purpose in the book is to ask whether it is possible to escape from the brink of climate disaster.  Furthermore, is it possible, she asks, to do so “without challenging the fundamental logic of deregulated capitalism?”  Klein’s unambiguous, raw, answer is: “Not a chance.”

So, do we have a chance?  What chance do we have?  In answer to the first question, Klein is ambivalent.  “It’s not clear which side will win,” she states, but goes on to say “the companies in the crosshairs are up against more than they bargained for.”

That qualification begins to answer the second question – what chance do we have?

Reading the book through in sequence from page 1 to page 466 the reader moves from despair, to struggle, to perhaps and finally to possibility and a sense of regeneration.  For that regeneration to occur Klein advises that a number of things need to happen:

1.  We must stop consuming – now.  That means not simply replacing our stuff with green alternatives.  It means quitting the consumption obsession.

2.  We must connect with each other and with the earth.  Klein cites many examples of this happening throughout the world and suggests that climate change has been one of the catalysts for previously disparate groups learning to coexist and collaborate.

3.  We must ramp up the opposition to Big Coal, Big Oil and Big Technology.  Klein sees the emerging Blockadia movement as a hopeful example of this.

(Coalitions and the Blockadia movement have left the NIMBY (Not IN MY Back Yard) isolationism behind and replaced it with Ni ici, ni ailleurs -  neither here, nor anywhere.  Climate change changes everything.)

4.  The most important thing that needs to happen, according to Klein, is that we must change our thinking, change our worldview, change our values.  We must choose policies “that don’t merely aim to change laws but change patterns of thought.”

5.  Finally, our faith and hope in our present top-down leadership must change.  We are going to have to become active in decision-making at local levels.  For Klein, “if change is to take place it will only be because leadership bubbled up from below.”

Naomi Klein is absolutely right:  This Changes Everything. 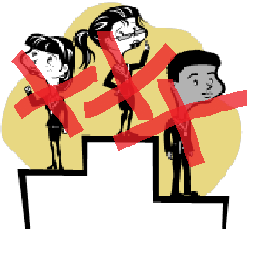 The Climate Change Performance Index (CCPI - Results 2015), released this week, is a sobering and disturbing read.  It analyses the performance of 581 of the world’s nations in terms of how they are doing with respect to climate change.

The CCPI compares the climate protection performance of each country using indicators on: emissions, efficiency, renewable energy and policy.

That is akin to no runner in the Olympic Marathon being awarded a gold, silver or bronze medal because none of them ran a sufficiently fast time to warrant it.

Disturbing indeed.  The report suggests that even if all nations of the world did as well as the top ranked nations the target of keeping global warming below a 2o C rise would fail.

Disturbing too is that the top 10 of the world’s largest CO2 emitters are responsible for approximately 2/3 of all emissions, with 7 of them being given a “poor” or “very poor” rating.

The countries doing best (i.e. given a “good” rating) all hail from Europe, apart from one – Morocco.  Indeed, Morocco is given especial mention in the report as it has shown considerable improvement in its climate change response in recent years, and is an example of how a developing nation can contribute towards action on climate change.  The report cites Morocco’s renewable energy targets, it’s development of solar2 and wind projects, and it’s cuts to gas and fuel oil subsidies as worthy of mention.

So, if the nations of the world aren’t up to scratch, and some of them are going backwards, what hope have we of remaining below the 2o C target?

That’s where we come in.  Us, the citizens of the world.  The common folk, those of us who do not sit around board tables or in the parliaments, congresses and senates of the world.

The way forward seems to be that change will only come from the ground-up, not from top-down.  And there are signs of that all around the world.  People and communities doing one of two things (often both): 1. protesting and blockading big oil and it’s associates and 2. undertaking local sustainable systems that prove that it is possible to live sustainably without the need to raise the temperature.

Neither of these actions are captured in the CCPI report and are certainly not mentioned in the “Key Results” area.  Yet, it is these local, community-led activities that will ultimately make the difference.  Perhaps the authors of CCPI will acknowledge this in a future report.

1. The 58 countries make up all bar those on the west coast of South America, most of Africa, and some Asian countries.  It does, however, include all the OECD, G20, ASEAN and EU countries along with a number of newly industrialised and “countries in transition.”  Altogether, these 58 countries account for more than 90% of global CO2 emissions.  This is the seventh publication of this report.  Jan Burck, Franziska Marten, Christoph Bals (authors), Climate Change Performance Index - Results 2015, Germanwatch/Climate Action Network (Europe), December 2014.
2. Morocco is constructing the world’s largest concentrated solar power plant in
Ouarzazate (500 MW).
Posted by bruce meder at 13:37 No comments:

How often do we look at a social problem and try to contain it.  We set up committees, government think-tanks and even NGOs – all with the express intent of defining the problem, analysing it and then solving it.  All within the box we have created around it.

Many years ago (1999 to be precise) a community development worker and thinker in New Zealand presented a paper to the Summer Heart Politics Gathering in Taupo, New Zealand.  He titled the presentation Co-operation, Collaboration and Co-ordination.1

vivian Hutchinson’s basic tenet was that traditionally we had tried to solve social problems and/or issues by establishing a group, organisation, agency or think tank to deal with each individual issue.  This model looked like this: 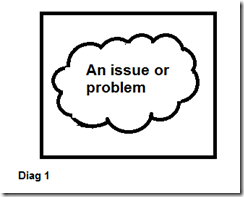 We attempt to contain the issue, place borders around it and then the “experts” within the containing box can deal with the issue and eventually solve it.

vivian then went on to describe our ways of dealing with social problems or issues being to set up discrete organisations to deal with (supposedly) mutually exclusive issues, as in this next diagram (Diag 2). 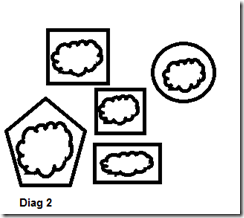 Each of the social issues (represented by the squiggly lines) is surrounded by and contained within the confines of an organisational structure (the solid lines).

Thus, according to this model, we set up organisations to deal with: refugees, people with disability, unemployment, climate change, mental health, youth issues, drug/alcohol, homelessness and numerous other issues,


This model Hutchinson labelled as the “in-charge” model.  Organisationally it is characterised by hierarchy, expert-based and rationalist.  These structures lead to elitism, authority and we-know-what’s-best mentalities.

However, said Hutchinson 15 years ago, the complexity of social issues is such that no one of us, nor any single-focussed organisation, is capable of containing and solving these issues.  Hutchinson suggested, instead, that the issues contain and surround us and our organisations, much as in this diagram (Diag 3) 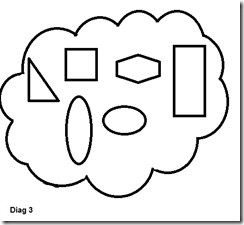 The organisations that we establish are surrounded by complex, and inter-connected, issues.  The issues are not mutually exclusive as the “in-charge” model suggests.  Hutchinson called this the “shared-power” model.

What do we do then, if the issues surround us, and not the other way round?


Hutchinson proposed that the first thing to do was to get rid of the notion that we are “in-charge.”

The second thing to do was to connect.  Hutchinson described the difference in the two models as


“In the in-charge model your effectiveness comes from your programmes and the resources you have to get the job done.  In the shared-power world your effectiveness is ruled by the quality of the relationships between key players, and especially their ability to work together to build trust, agreement and consensus.” (emphasis in original)

The key then is to connect, co-operate, collaborate and co-ordinate, as represented in Diag 4. 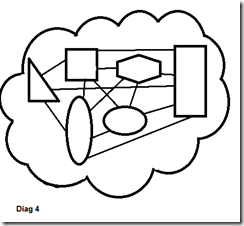 Working in this way is not easy.  It means having to creatively listen, to recognise connections between issues, to come to some level of consensus and agreement.

But, as Hutchinson was quick to point out, “whether we like this situation or not,” this model provides us with a more realistic portrayal of the social issues surrounding us.


There are many examples of such networks occurring around the world.  Since Hutchinson’s presentation 15 years ago, social issues seem to have become even more pervasive.

That just means that we have to be even more determined to connect with one another and find creative solutions in the diversity of our experience, knowledge, skills and wisdoms.

We also need to be vigilant.  Because the “shared-power” model is not easy, we can slip back into it very quickly because of complacency or inattention.  Being aware of the two models, though, does help reduce that possibility.