Which watch, what witch? 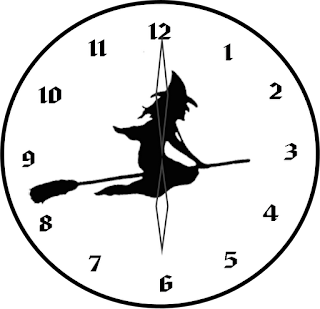 In my previous post I suggested that facilitation was one of the essential skills in a community development worker’s skill-set.  One of the tools that a facilitator has available is an array of icebreakers and warm-up games.

Here is one of my favourite icebreakers.  I call it the “Witch, Watch” game.  It has an intentional double meaning when spoken.  Its a good icebreaker for groups of about a dozen or so up to about 20.  On to the description:

The group sit in a circle.  The facilitator brings out an object (it can be anything: a marker pen, a coffee cup, a coin, anything within reach.  Its best if it is not a watch).  The facilitator then explains that they are going to pass this object to the person on their left (person A in the diagram below) with the remark “This is a watch”.  The person on the left is then to ask back “A what?” to which the facilitator replies “A watch”.

B then turns to Person C on their left and go through the same process, handing the object on and stating “This is a watch”.  C then asks B: “A what?”  B turns back to A, again asking: “A what?”.  A in turn asks the facilitator the question: “A what?”  to which the facilitator replies with the now familiar “A watch” and the reply is repeated back until it gets to Person C. 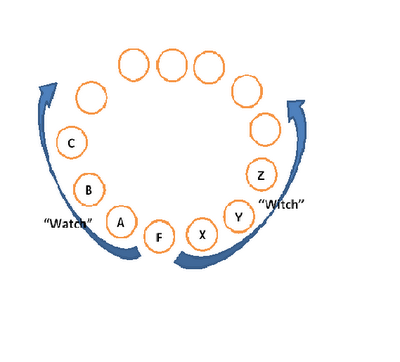 ﻿﻿﻿﻿﻿﻿﻿Person C now turns to the person on their left and the process is repeated always with the question returning to the facilitator and the reply being relayed back to the person now holding the object. And so it proceeds around the circle.

It is important that the facilitator when introducing and explaining the game mentions only the watch and leaves what is to come without explanation.  For once the “watch” object has passed through a few hands and is slowly making its way clockwise around the circle, the facilitator brings out another object, turns to the person on their right, passes the object to them and claims: “This is a witch”.  And so the process begins in an anti-clockwise direction always with the same questions but with the reply being “A witch”.

Thus Person X turns to the person on their right (Person Y) and passes on the object with the statement that “This is a witch”.  Person Y then asks of X: “A what?”, X turns to the facilitator and similarly asks: “A what?”.  X gets the reply: “A witch” and passes this reply on to Y.  Y then turns to Person Z and repeats the process.

People will get the process incorrect – this is all part of the fun of the game.  The facilitator may need to remind and prompt people.

The most fun of the game is when and if - the game may break down in hilarity before this - the two objects (the “watch” and the “witch”) meet and pass through the hands of one person at the same time.

If you ever manage to get the two objects to return to you (the facilitator) having completely circulated the group in both directions and without the process of question and answer breaking down I’d love to hear of it.  In the many years and many times that I have introduced this game to groups the game has always broken down in hilarity and confusion well before this happens.
Posted by bruce meder at 13:24