Symbols have been with us since the time we learnt to paint on cave walls or to draw in the sand.  Here, I focus on just four contemporary symbols relating to our search for a more peaceful and more just society that is in harmony with the Earth.

The Peace symbol is perhaps one of the most ubiquitous in campaigns around the world.  Originally designed for the Campaign for Nuclear Disarmament (CND) in 1958 for a march from Trafalgar Square to the Atomic Weapons Research Establishment in London.  The designer, Gerald Holtom, based his design on the semaphore signals for “N” and “D” indicating “Nuclear Disarmament.”  The symbol became the badge of CND and worn throughout the UK to indicate support for unilateral disarmament.  The symbol quickly became adopted by various organisations for peace and disarmament throughout the world.  There have been attempts to discredit the symbol as being an icon of the devil (witch’s foot or crow’s foot).  Irrespective of the similarity it can hardly be mistaken today for anything but the primary symbol for peace. 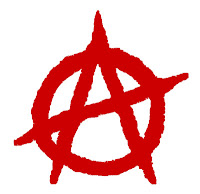 The Anarchist symbol is also well know, but, unfortunately, not well understood.  Anarchy is commonly thought (mistakenly) of as chaos, disorder, confusion and unruliness.  The symbol itself though is a combination of two letters – an “A” indicating anarchy or anarchism, and an “O” for the word “order.”  Not well known is that the background to combining anarchy and order is the quote “Anarchy is the mother of Order” from Proudhon (one of anarchism’s foremost theorists).  Anarchy simply suggests a social system based on mutual cooperation devoid of a ruling elite.  To elaborate further on this would require much than this blog post is able to.  The symbol is included here as the concept behind anarchism is redolent of the desire by those working in Community Development and Social Justice for empowerment and justice for those in marginalised or dispossessed communities. 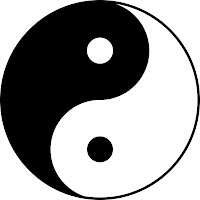 Although the yin-yang symbol has it’s roots in Chinese philosophy it is now an universally recognised and used symbol.  Yin (the black side) and yang (the white side) are complimentary to one another and symbolise the harmony that comes from recognising that one without the other is not possible.  Similar to the concept of heads and tails of the same coin yin-yang recognises the interdependence of all things.  Noteworthy is that within the yin (black) side is a small white dot and within the yang (white) is a small black dot.  This symbolises that within each aspect there is the seed of the other, thus suggesting the continual  interplay between all phenomena.  The two aspects (yin and yang) then, are not opposing each other but are rather complimentary.  Each both needs the other in order to exist as well as being the source of the other.  Which is the cause and which the effect is impossible to determine.  Delving into such systems thinking and philosophy could teach us a lot about ourselves and our social relations.

The fourth symbol that is highlighted in this blog is the rainbow.  Although it has become very much identified with gay pride over the past decade or two, the rainbow has perhaps been used as a symbol for more ideas and concepts than any other symbol.  In Western culture the rainbow was a sign of hope and a promise to Noah.  The splitting of light into the seven colours of the rainbow is well known to most primary aged children.  Thus, can be seen the idea of diversity (the seven colours) contributing to unity (white light).  The rainbow is used as a symbol in many ways, here are just a few:
Symbols can have significant meaning for us and these are just four of those that express many of the concepts and ideas associated with social justice, sustainability and community development.
Posted by bruce meder at 15:30

Email ThisBlogThis!Share to TwitterShare to FacebookShare to Pinterest
Labels: Meanings and Definiitions