The shots that rang out in December 2012 from the Sandy Hook school, and those that were heard earlier that year from inside the theatre in which the Batman movie was playing, echoed around the world.  Gun reform debates were rekindled in the US.  In other parts of the world analyses and opinions were printed in major newspapers.  In Australia much mention has been made of the gun reforms that were instituted after the Port Arthur massacre1.

So I thought I’d do a little of my own research.  I found the statistics for gun ownership and also for the incidence of homicides where firearms were involved2.  I limited the research to the Western nations of Europe plus Australia, New Zealand, Japan, Israel, Canada and the US so as to, as best I could, be comparing like with like.  I then plotted gun ownership versus firearm homicides for each country in a scatter array.  The graph is shown below.  The y-axis shows the number of firearms per 100 population.  The x-axis shows the number of homicides by firearms per 100,000 population.  The straight line moving diagonally up the graph is the line of best fit. Make of it what you will, however, I have a couple of thoughts. 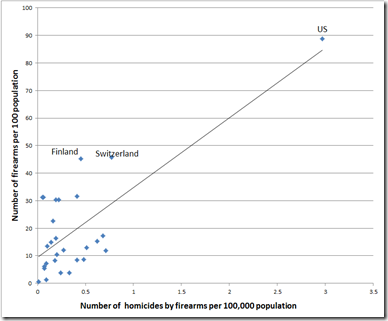 Firstly, the position of the US is vastly different from that of the other nations.  It has a significantly higher gun ownership level (89 guns for every 100 people living in the US).  It also has the highest incidence of homicide by firearm: 2.97 per 100,000 of the population.  This is almost four times the level of the next highest - Switzerland at 0.77.  Of the 29 nations plotted, 24 have an incidence less than 0.5 per 100,000.  The US firearm homicide rate is six times that of most Western countries!

The rising slope of the “best fit line” suggests to me that there is a positive correlation between gun ownership and the number of homicides by firearm.  In short, the more guns there are, the greater the likelihood of firearm homicides.

I also thought that I might plot the number of incidences of firearm massacres (defined as an incident in which four or more people are killed) versus gun ownership per country.  But, when I looked at the data the graph would be ludicrous.  Graphed over a period of 20 years most countries would be grouped around the x=0, y=0 point and the US would be off the chart.  Go figure!

Decide for yourself, but I for one am totally unconvinced by any of the arguments put forward by gun lobbies, either in the US or any other part of the world.  To mimic one comment from the National Rifle Association – the way to stop bad guys killing people with guns is for good guys to stop the manufacture and sale of guns3.  Guns kill – full stop.

1. Port Arthur (in Tasmania, Australia) was the site of one of the worst mass shootings in the Western world, with 35 people being killed in 1996.  Shortly afterwards, the Australian Prime Minister (John Howard) introduced sweeping gun reform measures including restrictions on the type of gun able to be owned, controls on use and a buy-back of almost one million guns   Prior to 1996 there had been 13 mass shootings in 15 years.  Since then, Australia has witnessed not a single firearm massacre and there is also research indicating that firearm homicides and suicides have reduced significantly (and have not been replaced by homicides using other weapons).
2. The stats on gun ownership came from the Small Arms Survey, an independent research project based in Geneva, Switzerland and are for the 2007 year.  The stats for homicides from firearms come from UNODC (UN Office on Drugs & Crime).
3. After the shooting at Sandy Hook, NRA executive vice president Wayne LaPierre commented that “The only way to stop a bad guy with a gun, is a good guy with a gun.”

Email ThisBlogThis!Share to TwitterShare to FacebookShare to Pinterest
Labels: Guns