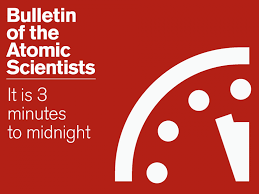 Watching the clock is an old idiom that means that we want something to finish so that we can get on with the rest of our lives.  Usually, what it is that we want to finish is boring, laborious or something we consider to be unfulfilling.

Last week the Bulletin of Atomic Scientists set the minute hand on it’s Doomsday Clock to 3 minutes before 12 midnight.  If we were watching the clock then the tediousness, laborious action that we are involved in hasn’t got long to go.  Just three minutes – not long is it?

But in this case it is three minutes that we do not want to pass by.  The minute hand of the Doomsday Clock represents just how close human society is to self destruction.  Close, very close, according to the Bulletin of Atomic Scientists.

Every year since 1947 the Science and Security Board of the Bulletin of Atomic Scientists has met to analyse international threats.  Initially it was the threat of nuclear warfare and annihilation that they focussed on, and in 1947 (just one and half years after the dropping of the atomic bombs on Hiroshima and Nagasaki) the Clock was set at seven minutes to midnight.

Over the next six years the minute hand crept closer to midnight, reaching 11:58 pm in 1953, the closest it has ever been set to midnight.  This coincided with the US and USSR trading nuclear tests and the build up of their respective nuclear arsenals.  As the two nuclear super-powers began to see sense during the 1960s and 1970s the minute hand slipped back again so that by 1972 it was resting at 12 minutes to midnight.

However, the onset of the Cold War and other nations joining the “Nuclear Club” the clock again moved perilously close to midnight, getting to three minutes before midnight in the mid-1980s.

Again, reason was seen by the superpowers and the collapse of the Iron Curtain and the signing of the Strategic Arms Reduction Treaty by the US and the Russians saw the minute hand move the furthest it has ever been from midnight – being set at 11:43pm in 1991 where it remained for four years.
Unfortunately, an increase in militarisation and the testing of nuclear weapons by India, Pakistan and North Korea brought the minute hand closer to midnight again.

In assessing the threat of annihilation the Bulletin of Atomic Scientists added climate change to its measures in the mid- 2000s and the clock ticked down towards midnight, reaching five minutes to midnight in 2012.

However, this year the minute hand has been reset – this time two minutes closer to midnight – just three minutes away from Doomsday!  Only twice before has the Doomsday Clock been so perilously close in its 68 year history.

Are we watching the clock?  Those who assess and make a decision on where to set the minute hand are amongst some of the most distinguished scientists in the world.  Scientists, by training, tend to be cautious if anything on making judgements and predictions.  If this body of scientists has set the clock at just three minutes to midnight then they are worth listening to.

Certainly, the clock that they have set is worth watching.  We must now all act to stop the clock ticking even closer to midnight.
Posted by bruce meder at 10:14 1 comment:

Where do we act?

Those working for social justice and sustainability must decide where we act?  With all the outcry over Charlie Hebdo1 in recent weeks, the question is a pertinent one.
over

Or, we could focus on ourselves.  We could act personally, and within our own country, culture or religion.

The trouble is that we are all to quick to apportion blame, responsibility and the need to change on the “other.”  But, as is said; it takes two to tango.2  Within any conflict there is a part of the truth on either side.  There is also part of the guilt on either side.  If we keep apportioning the whole of that guilt on the “other” then we are just going to keep going round and round in an everlasting (and often escalating) circle.

And escalate it does.  When we apportion blame and guilt on another, we then start to notice every act that the “other” does as further “proof” that they are to blame.  It’s a bit like when we buy a new car, we suddenly notice that same model car everywhere we look.

So, the circle keeps going round and round, escalating with every circuit.

Where do we break that circle?  How do we de-escalate the cycle of violence, blame and guilt?  Not by pointing the finger at the other, that’s for sure.  For as soon as we point the finger at the other, the chances are that they will just point back and say something like “you started it.”  And that goes as much for inter-cultural rivalry and international conflict as it does for us at a one-to-one level.

The Charlie Hebdo incident is a good example of this.  Millions of people worldwide marched in support of Charlie.  Sometimes, that support was re-focussed and became vitriol directed outward upon Muslim people – the “other” culture and religion.  But within our western society don’t we have a responsibility to look at how we contribute to, and exacerbate, such incidents?  It is the western powers that have largely invaded Middle Eastern countries.  The racism displayed by westerners towards Muslim people is wide-spread.  This racism often extends to making offensive remarks or images.

This then is where we must act.  Within ourselves, within our culture, within our own spaces.  We must seek out the ways in which we give offence and contribute to the escalating cycle of violence.  We can attempt to get rid of the rotten seeds (racism, sexism, militarism, ill-will, greed etc etc) within our own culture.

Perhaps Charlie Chaplin (one of the world’s greatest comedians) expressed this idea best when he said that:

1. Charlie Hebdo is a French weekly satirical magazine.  On 7 January 2015 two gunmen opened fire in its offices, killing twelve.  The magazine had previously printed cartoons that were offensive to many of Muslim faith.
2. The saying “it takes two to tango” comes from a 1952 song Takes Two To Tango written by Al Hoffmann and Dick Manning, and made famous by singer Pearl Bailey.
Posted by bruce meder at 13:44 No comments:

At the beginning of a new year many people ask themselves what they are going to do in the coming year, or make resolutions designed to bring about change in their lives.

Perhaps it is a good time to find our purpose.  Not just individually, but collectively as well.  What’s the purpose?  What are we, humanity, doing here?  Whatever it is, are we doing it well?

There are many indications that whatever we are doing here we could certainly do it a lot better.  A whole lot better.
Dr Seuss brings these collective issues back to each and every one of us.  In his delightful story The Lorax he says this:


“Unless someone like you cares a whole awful lot, nothing is going to get better.  It’s not.”

So, how do we find our purpose.  There is an often shown diagram that may help. 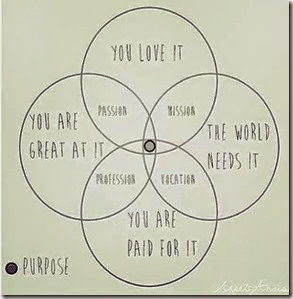 This diagram suggests that our purpose is found at the point where the answers to four questions meet:
If we can answer these four questions honestly and with compassion towards the world and others in it, then we may be able to find our purpose.

If we are unable to find that “sweet point” in the middle that does not mean that we are unable to act or are unworthy.  Being passionate about something, knowing what our mission is, or finding our profession or vocation are just as important to us as individuals and may go a long way to helping “care an awful lot” as Dr Seuss suggests.

And, if we are unable to find our mission in life, Richard Bach (the author of Jonathan Livingstone Seagull1) has a simple and enlightening piece of advice:


“Here is a test to find whether your mission on Earth is finished: if you’re alive, it isn’t”

1. Jonathan Livingstone Seagull is a novella published in 1970 about a seagull learning to transcend the limitations of his existence.  The book became a best seller and inspired a film of the same title, featuring a Grammy Award winning soundtrack by Neil Diamond.  Richard Bach wrote numerous fictional books, many of them espousing a philosophy of transcendence, self-development and positive mindsets.
Posted by bruce meder at 17:00 No comments: