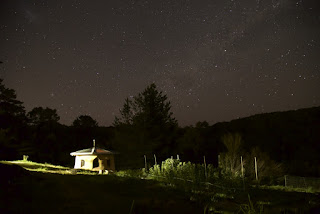 The world is complex.  How many times have you heard that?  The complexity of the issues and problems facing us are enormous.  Peak oil, climate change, inequality, resource depletion, war, terrorism.‘It’s all so complex’ dozens of advisers, diplomats, politicians, and leaders of industry tell us.

Complex, maybe, but the solutions could actually be quite simple.

In fact, there is a simpler way the writers and directors of this film tell us.  So simple that they decided that should be the film’s title: A Simpler Way.  The simple setting of the film is to follow the journeys of a dozen or more people over one year, who came together to form an intentional community based on sustainable principles.

Wurruk’an, as the community is named, is located in Gippsland, approximately 200km east of Melbourne, Australia.  The name, Wurruk’an is a combination of the local indigenous word, wurruk, meaning earth and/or story and the Mayan word, k’an, meaning seed.  Hence this film could be considered to be the seed of the (new) story of the earth.

Using the stories of those who undertook this journey, and the commentaries of a number of people who have thought about and written about the need for a simpler way, the film gives us a glimpse of tomorrow’s story.  The old story of endless growth, consumerism and destruction must give way to tomorrow’s story these people tell us.  One commentator notes that, as a society, we are between stories, “desperately clinging to yesterday’s, but uncertain of tomorrow’s.”

This film is important because it allows us to think about, imagine and seek a new story for tomorrow.  It is also important, because “we are facing limits,” and our present story is harmful and unsustainable.

Sustainable is another of those words and concepts (like complexity) that we hear a lot about.  This film notes that sustainability is not sufficient; what is needed is regenerative solutions.  We must find ways to regenerate the earth, ourselves and our relationship with the earth and with each other.  We drastically need to reduce our demand upon the earth and our demand for energy.  We will not be able to meet ongoing energy demands with renewables, yet, if we reduce demand we will make it easier for that demand to be met by renewables.  This film shows that all of this is possible.

It also shows that our other great demand – food – can be changed.  “Food consumption is a moral and political act,” states Zainil Zainuddin, an Urban Agriculture researcher based at RMIT University, Melbourne.  Food is the most intimate connection we have with the land via our senses, she says.  We can taste it, smell it, see it, and it has texture.  Many of Wurruk’an’s residents echo this, telling stories of the pleasure of growing their own food, discovering the joys of getting their hands dirty and learning what works.

However, just because it is simple doesn’t mean it is easy.  The film does not shun the difficulties that residents faced.  Most of the difficulties lay in the communications and relationships between people.  As one interviewee noted,  the knowledge and skills of being together, living in community, have been broken in our western culture.  The arts of communication, conflict resolution, celebration have been ripped out by our individualised and isolating lifestyles.  These arts had to be rediscovered, tried out, and learned anew.  Many mistakes were made over the course of the year, conflicts and contradictions arose.  “Judged that way, we failed,” the interviewee says, but goes on to say that these mistakes were the gifts and learnings from the year.  He ends the interview by exhorting the viewer to “make beautiful  mistakes.”

A Simpler Way follows only one small community on it’s journey.  How does this approach make any difference in a world of suburbanised cities and concrete jungles?  This film does not address this issue in depth.  That is the next part of the story that needs to be experimented with and told.  However, David Holmgren, the co-originator of the permaculture concept, is unafraid to address this.  He advocates an incremental approach with individual households and small urban collectives harvesting water and using space much more creatively.

The film is unashamedly upbeat about the possibilities for the future.  The future is up to us, it’s not about getting “good guys into large structures” Helena Norbert-Hodge warns us towards the end of the film.  It is up to each one of us, acting collectively to work systematically towards smaller and more localised systems and structures.

Wurruk’an is one of the experiments and examples that we have for this new story.  It is one of the “bubbles of creative responses,” as John McKenzie from the Black Bulge Community tells us.  This film is a further example that we have – a highly transportable one.

The opening screen shot of the film is depressing - a number of large smokestacks belching filth into the air.  It ends though with a positively encouraging quote from Buckminster Fuller:


“To change something, build a new model that makes the existing model obsolete.”

A Simpler Way is co-directed by Jordan Osmond and Samuel Alexander and funded by the contributions of almost 80 people.  It is highly recommended, easily understood, encouraging, optimistic and enjoyable to watch.  It is available at

or on youtube at https://www.youtube.com/watch?v=XUwLAvfBCzw
Posted by bruce meder at 20:14