Are You The Hundredth Monkey? 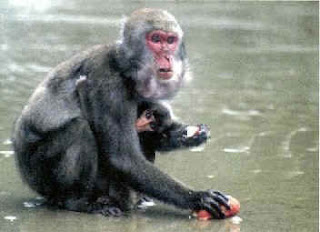 Seeking social change can sometimes seem disheartening can’t it?  Nothing seems to change.  In fact, sometimes it can appear that we are going backwards.  More war, more inequality, greater environmental destruction, more famine, more refugees.  We can become disparaged, disillusioned and even plummet into the depths of despair and despondency.  It seems that the only thing left to do is to withdraw.

Maybe it’s not all so discouraging.  What if there were already 99 monkeys, and you were to be the one-hundredth?

The story of the hundredth monkey is becoming a fairly well known urban myth.  It tells of monkeys on a Japanese island eating sweet potatoes that were often made less tasty by the dirt.  One monkey found that by immersing the sweet potato in water the dirt would wash off and the potato became more palatable.  Eventually other monkeys copied and began to wash the sweet potatoes also.  Finally, the one hundredth monkey took up the habit and, so the story goes, immediately all the monkeys on other islands adopted the practice.

Maybe you are the one-hundredth monkey, and that once you take up a new action or behaviour then many others will do likewise.  Or, perhaps you are the ninety-ninth monkey and still nothing seems to have changed.  But wait – it may only take one more.

The story of the Hundredth Monkey has been disputed, even ridiculed, and with it the metaphorical meaning.  The hundredth monkey may be a mythical story but it tells an universal truth.  We all know the truth of the story and we have a number of metaphors and theories to tell it.

The straw that broke the camels back is a well known saying that has been with us since at least the early 19th century.

The Domino Effect tells of a whole row of standing dominoes being tipped over one by one, simply by tipping the first one.  During the 1950s and 1960s the US administration developed the Domino Theory speculating that if one country in SE Asia fell under communist rule then others would follow.

A Chain Reaction is similar to that of the Domino Effect.  One action in one place causes an action in another place and so on in an ongoing action-reaction.

Critical Mass states that once a phenomena has reached a certain stage (or mass) then it becomes self-sustaining and grows.  A nuclear explosion is a well-known example of this.

Getting on the bandwagon is a metaphor illustrating how once a number of people have accepted an idea then that idea becomes popular amongst a wider population.

A Tipping Point is the point where something that has been trending in one direction suddenly veers from that direction and goes in a completely different direction.  Malcolm Gladwell has written much about tipping points in his book of the same title.1

The First Follower is a graphic illustration of how a movement begins with one person and is, crucially joined by the first follower.  Derek Sivers in a 3-minute TED talk expertly shows how this works.

A number of scientific theories bear similarities to the basic idea of the hundredth monkey.

Catastrophe Theory (also Bifurcation Theory) is a mathematical theory that explores what happens when phenomena suddenly shift in behaviour because of small changes in circumstances.

Chaos Theory provides us with the well known Butterfly Effect, whereby a small change in initial conditions can produce widely varying outcomes.  The Butterfly Effect gets its name from the idea that a butterfly fluttering over the Amazon forest can set off a storm in Tokyo.

Emergence describes the process whereby larger entities or patterns arise from the interaction of smaller or lesser entities.  Furthermore, the properties that arise (emerge) in the larger entity do not exist amongst the smaller, separate, entities.

Fractals are natural, or mathematical, structures that exhibit a set of repeating patterns at all scales, from the micro through to the macro.

All of these metaphors and theories tell us that small and apparently insignificant inputs can contribute to large and significant outcomes.  They also tell us that we will never know what those outcomes will be.  Nor can we predict which specific input it is that tips the balance, because they are all inter-related.

We are unable to answer any of those questions categorically.  But we can continue, knowing that the hundredth monkey will come along and we will all take up the habit of washing our sweet potatoes and enjoying a more palatable meal.