I'm taking a short break from writing of a week or two.  Thanks for visiting this site during 2013.  Back again in 2014.  Best wishes to everyone.  Bruce
Posted by bruce meder at 12:10 No comments:

A couple of postings ago I questioned whether our fear created climate change? 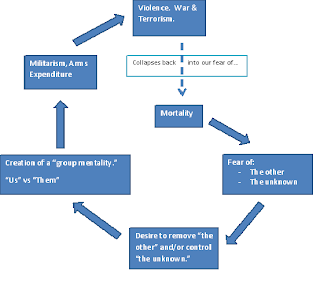 The other fear is the fear of the other, or of the unknown.  The realisation that we are alone causes us to ask “who are those others?” or “what’s out there, beyond us?”  Both reactions can stimulate a desire to overcome the other or to control what is out there.

But, we cannot do this on our own.  Somehow, we put aside enough of our fears to combine with those that we consider friends, allies or, at least, those with similar ideas and values.  These alliances are often grounded in cultural, ethnic, religious or national affiliations.  Now, we have a collective group to which we can belong, to which we can identify.

Complementary to this arises other collective groups to which we assign the titles of; them, enemies, aliens, foreigners, inferior beings or outsiders.  The group with which we identify gains a group mentality which, if followed in a noxious manner leads to “Us vs. Them” or “We are Good, They are Evil” mental states.

The combined xenophobia and chauvinism that this mentality leads to is a build up of military capacity and/or the willingness to die for the cause.  Ultimately, this gives rise to large arms expenditures, arsenals that could destroy the world many times over and heightened tensions.
There are at least two possible outlets for this spiralling madness.  One is war.  The other is terrorism.  Peter Ustinov1 however, suggests (and who can really contradict him) that:


“Terrorism is the war of the poor.  War is the terrorism of the rich.”

And so, we arrive at a place where violence becomes the accepted means by which disputes and other issues are resolved.

And, what happens when we face violence?  We collapse back into our fear of our mortality.

So the spiral goes, in tandem with the spiral leading to climate change.  Neither spiral can be stopped at the top-end of the spiral (i.e. in the climate change or violent solutions boxes).  We must look to our fears and try to understand who we are and what is the self.  Are we truly alone?  Another blog post, I fear!

1. Peter Ustinov (1921-2004) was an English actor, writer and dramatist.  he won two Academy Awards for Best Supporting Actor.  In his later life he dedicated himself to his role as a Goodwill Ambassador for UNICEF.

One of the greatest men of the 20th Century, Nelson Mandela has died peacefully.  Mandela’s legacy will live on far beyond the shores of his native South Africa where he was also known as Madiba – his Xhosa clan name.


South Africa in the second half of the 20th Century was one of the last nations on Earth to retain the institutionalisation and legalisation of racial oppression under the name apartheid.  The names Steve Biko, Walter Sisulu, Archbishop Desmond Tutu and others came to be known throughout the world as indigenous leaders of the resistance to apartheid.  But by far, the most well known name was that of Nelson Mandela.

Originally espousing violence as a means, albeit one he felt forced into by the brutality of apartheid, Mandela went on to proclaim a nonviolent resistance.  Later, when he became the nations Prime Minister he solidified this commitment with nonviolence by seeking to forgive rather than to condemn and punish.

In 1995 when Mandela walked onto the rugby field at Ellis Park, Johannesburg, at the start of the Rugby World Cup final wearing the green Springbok jersey Mandela was signifying not just to his nations people, black and white, but to the entire world, that reconciliation is possible.  The green Springbok jersey until that moment had become a hated symbol of apartheid by those opposing sporting contact with South Africa throughout the world, particularly in Australia, New Zealand and the UK.

Yet, there stood a man who had suffered incredibly under the system of apartheid that the Springbok jersey had come to represent.  Mandela had moved from being a victim to being a merciful forgiver.  Mandela had moved from being a perpetrator of violent means to being a man of peace and justice.  When he stood on that field in that jersey, Mandela was announcing that we could all do the same.  We could all become peaceful, we could all be forgivers.

At his 90th birthday celebratory concert in London’s Hyde Park, attended by thousands, Nelson Mandela ended his speech by saying that after ninety years of life the work was now in the hands of others.

Let us accept and cherish his gift.  Let us continue to work for peace, justice and freedom using the two tools that he left us: compassion and forgiveness.
Posted by bruce meder at 14:43 1 comment:

Climate Change.  Those two words create all sorts of thoughts, feelings and emotions in people.  Do our own emotions create climate change itself?  Specifically, does fear give rise to climate change?

Have a look at this model. 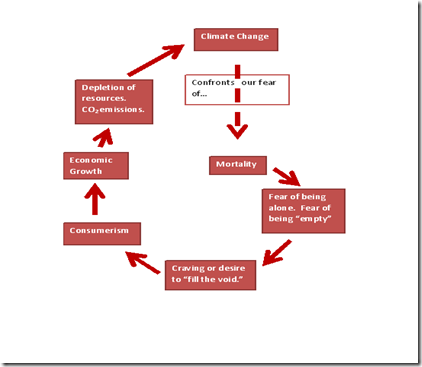 © Bruce Meder, 2013    We are all mortal.  Some psychological theories and spiritual understandings suggest that when we think of our mortality we are faced with fears.  One of those fears is the fear that we are ultimately alone, that we are “empty.”

In order to satisfy that emptiness we turn to various activities in an attempt to fill up that empty space.  One of the ways we do that is via consumerism.  Go out and buy something; the latest technological gadget, fast food or alcohol.  At a national level it may be the purchase of a multi-million dollar jet fighter or the building of a new palace or parliamentary building.

Consumerism feeds Economic Growth.  Economic Growth has come to be seen as the panacea for a all sorts of issues in the world.  “We need growth” the industrialists and political leaders will cry.  But do we?  Really?
As we know, economic growth leads to resource depletion and to more and more carbon emissions and other forms of waste.

Then what?  If we seriously consider climate change and the possibilities that continuing climate change has upon the earth and us humans living on the earth then we end up facing (again) our mortality.  This time as a whole species, not just as individuals.

And so, the ever increasing spiral collapses back into the point at which we started.

Notice too that, although the spiral model above began with the individual, as we move around the spiral the “I” becomes “we.”  Climate change is not caused by any one of us, it is caused by our collective actions.

Does this model help us understand the connection between ourselves and our fears and how that helps to create climate change?  I would like to hear your thoughts?

P.S.  One of the other fears that we can have as a response to our mortality is the fear of the “other”, fear of the “unknown.”  Via a similar spiral of connections that can lead to the another of the major issues facing humanity – war and terrorism.  That’s for another posting.