Simply Living in History: A Review 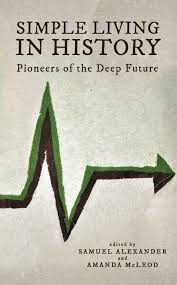 Simply Living in History1 is published by the Simplicity Institute and is an important book – because of its simple message: we can and must live simply.  Indeed, after almost 200 pages the author of the chapter on Permaculture states unequivocally “greater simplicity is not optional.  It is unavoidable.”

A few pages later, one of the book’s editors notes that “any solution to todays social, economic, and ecological problems will not be solved and probably only exacerbated at the highest government level.  It follows that it is up to us.”

And that is what this book does.  It shows that we can do it, that we have done it – for thousands of years – and that we are still doing it.  Or, at least some of us are – living simply that is.

It is possible to read this book by dipping into any of the chapters in any order that you wish.  Each chapter is complete in itself and each is written by one of 24 different contributors.  The chapters give a brief overview of historical examples of communities and individuals who have opted for simplicity throughout history.

However, by reading the book through in sequence the reader becomes impressed by the continuous chain of seeking for simple ways of living that humanity has pursued over the past 2,500 years.  The book begins with Buddha in the 5th Century BC and continues up to the present day, culminating with an essay on mindfulness – a practice that has entered Western thought by way of Buddhism.  Thus, the book neatly turns its own circle.

There are two caveats to place on the reading of this book.  First, it draws heavily on the Western tradition, apart from one chapter on Buddha and another on Gandhi.  The Greek and Roman thinkers are represented by Diogenes, Aristotle, Epicurus and the Stoics.  Two chapter on Jesus, St Francis and the Monastics then serves as a bridge between the Greeks/Romans and the 16/17th Centuries where we meet the Quakers, the Amish and thinkers such as Henry David Thoreau, John Ruskin and William Morris.

The second half of the book begins with overviews of 20th Century communities (e.g. Ditchling Village and the Agrarians) and writers (e.g. Ivan Illich and John Seymour).

The final chapters outline the ideas that many today are familiar with (e.g. Voluntary Simplicity, Permaculture, Transition Towns and Degrowth) before ending with the chapter on Mindfulness.

Although the attention of the book is on the Western tradition, this should not be viewed as a criticism.  It is primarily the Western, rich, nations that have contributed mostly to the problems that now mean that a simple path is a necessity.

The desire for a simple way of living can have many motivations: moral, philosophical, ecological, economic, social, religious, practical, communal – all these motivations are represented here.

If there is one theme that underpins each of these motivations it is that at the heart of each is a desire for a less consuming way of life.  It is, as the editors (Samuel Alexander and Amanda McLeod) note in the Preface: “simple living is about knowing how much is ‘enough’ and discovering that ‘enough is plenty’.”

Serge Latouche2 is even more adamant when he contends that “we have to deal with the addiction to the drug of consumerism.” (my emphasis)

Although there is an undercurrent that consumerism as an ill that, well, consumes us, the book is hopeful.  As Mark Burch3 reminds us: “People have never taken up simple living because they thought it would make them worse off.  They have never persisted in it if it reduced their wellbeing.”

Yes, it is a hopeful book, it is an inspirational book and it reminds us that there is a wealth of experience and knowledge to draw on in seeking a simpler way of life that offers greater well-being for all.

Simply Living in History is available at www.createspace.com/4907640

1. Samuel Alexander & Amanda McLeod (eds) Simple Living in History, Simplicity Institute, Melbourne, 2014.  www.simplicityinstitute.org
2. Serge Latouche is Professor Emeritus at the University of Paris-Sud.
3. Mark Burch retired as Director of the Campus Sustainability Office for the University of Winnipeg and is currently a Fellow of the Simplicity Institute.
Posted by bruce meder at 08:53