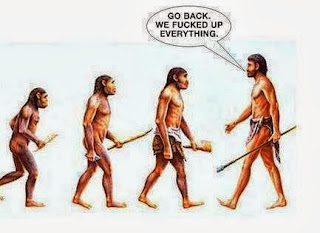 This week the Intergovernmental Panel on Climate Change (IPCC) released the first part of it’s Fifth report.  Briefly, the report tells us: a) the planet is hot, b) it’s getting hotter, c) it’s going to get much hotter and d) we (i.e. us humans) are to blame.

The report states that “warming of the climate system is unequivocal.”  Pretty strong stuff.  But will we do anything about it?  Not if we look at our past history.

The IPCC was established in 1988 with it’s first report coming out in 1990.   During the IPCC’s lifetime the earth’s surface has become successively warmer, with the past three decades being hotter than any preceding decade since 1850.  During those three decades (and despite four previous IPCC reports) the concentration of CO2 in the atmosphere has increased from under 340 ppm (parts per million) to over 380 ppm.

That doesn’t augur well for us acting.  So, why don’t we?

Clive Hamilton (the author of Affluenza) has also pondered this question.  In his 2010 book, Requiem For A Species1, Hamilton outlines a number of reasons for the inaction encompassed within two broad themes – denial or avoidance.

Amongst the ploys of avoidance, the following are common examples:
Noting that “buying green” is not to be criticised, Hamilton warns that “when (eco-friendly) products are promoted as the solution to environmental decline they may actually block the real solutions.”  This is because “climate change is a collective problem that demands collective solutions.”  Hamilton pulls no punches:


“The danger of green consumerism is that it transfers responsibility from the corporations mostly accountable for the pollution, and the governments that should be restraining them, onto the shoulders of private consumers.”

If abating the heating of the planet requires collective effort then those that have some skill and knowledge of promoting that are Community Development workers and activists.  Perhaps more than any other time in it’s history, the whole planet now needs the skills of community development workers, not just individual communities.

************************
I am presently seeking feedback on this blogsite.  Please take a couple of minutes to complete the survey on Survey Monkey.  See the link to the right at the beginning of this blogpiece.


1. Hamilton, Clive. Requiem For A Species: Why we resist the truth about Climate Change, Allen & Unwin, Crows Nest, NSW, Australia, 2010.
Posted by bruce meder at 15:37