Political Party Gets It 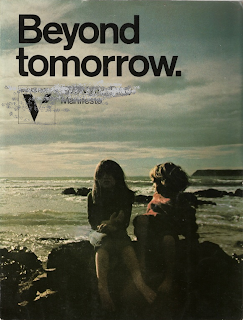 “Much of our present intervention in the relationships between living species is not making the world a better place.  It is not in the interests of any species… (The) Party exists to tell anyone who’ll listen that we must start taking sensible action now in case our species does not find a last-minute escape route from the logical consequences of it’s greed and stupidity… We do not need to destroy the ecosphere utterly to bring catastrophe upon ourselves: all we have to do is to carry on as we are.”

Finally!  A political party that seems to be listening to the reports of the Intergovernmental Panel on Climate Change (IPCC) and others.  The latest IPCC report (released in September 2013) was unequivocal: “Human influence on the climate system is clear.”  Humans need to take action, the report stated:

So, which political party was it that made that opening statement?

The political manifesto that the Values Party published then (Beyond Tomorrow1) remains today as one of the most visionary and sensible documents ever published by any political party in the world.

What Was the Values Party

The New Zealand Values Party was scrambled together just six months before New Zealand’s 1972 general election becoming the world’s first green political party.  Promoting an entirely new approach to politics, the Values Party eschewed both left and right political doctrines and focused on a zero growth blueprint for the future.  Zero growth!  Neither the capitalists nor the socialists could tolerate such anathema.  But, almost 2 percent of the voting public did.

When it contested the next election, in 1975, Values gained over 5% of the vote.  If New Zealand had had it’s MMP system then, this would have translated to four of five seats in the New Zealand Parliament of 87.

Had those few party members gained access to the realm of public decision-making in New Zealand, would we have seen an alternative socio-economic path taken to that of the past four decades?  Such a small initial difference may have been just what was needed to make a significant difference in the future of the world.

In 1972 and 1975 the terms “global warming” and “climate change” had not entered our vocabulary.  But, the warnings were there.

Just a few months before the Values Party was founded an important book was published. The Limits to Growth2 had, in fact, informed the thinking of the founders of New Zealand’s fledgling political party.

Both the authors of the book and the members of the political party were dismissed at the time as crack-pots, doomsayers or just plain starry-eyed tree-huggers.  Yet, those authors and party members may have been the sanest, most visionary and realistic people around.

Today, we know that the authors of The Limits to Growth were correct.  Unfortunately, we did not heed their warnings.

There were some solutions being offered as well. Beyond Tomorrow was 80 pages of visionary alternatives designed to promote sustainability and social justice for the poor and marginalised, yet retaining and enhancing well-being for all.

It’s Not Too Late

PS.  I am seeking feedback about this site at present.  Please feel free to complete the short survey,  There is a link to the survey at the top right of this page.
Posted by bruce meder at 15:52