“In times of crisis we come together to help each other and make things better.”  We heard this statement recently in regard to the severe bushfires devastating homes and dreams in New South Wales, Australia.

But what if we don’t think there is a crisis?

Like the story of the frog in the water that is slowly brought to the boil, are we also unaware of just how hot the water is becoming?

Yet the three real-life scenarios mentioned above should give us a hint that something more than isolated, one-off events are occurring.  What links Australian bushfires, hurricanes in the Caribbean and Indian floods?  Two words: Climate Change.

Australian Greens MP, Adam Bandt, succinctly and unambiguously observed (following a day of fiery devastation) that “this is what global warming in Australia looks like and it’s going to mean more fires happening more often and some of them more severe when they happen.”

Bandt could easily have been talking of any country in the world.  He could also just as easily replaced the word fires with the words hurricanes, floods, tornadoes, drought or heat-waves.

That’s the real crisis.  Yet, for some reason, we are not coming together to help each other (let alone the planet) and make things better.

Importantly too, we are still letting our politicians, business leaders and policy makers off the hook.  We are not demanding the accountability necessary of them. 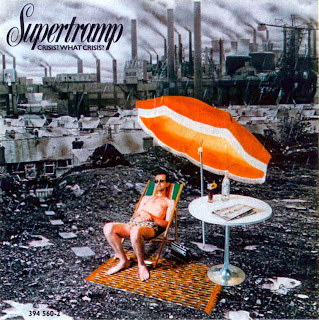 In 1975, the progressive rock band Supertramp released an album titled Crisis? What Crisis?  The cover of that album showed a man wearing dark sunglasses sitting in a deck chair underneath a beach umbrella.

Meanwhile in the background grey factories are belching fumes into the atmosphere and all around him is ruination.  A more poignant illustration of our avoidance of the crisis around us would be hard to find.

A few lines from that same album are also worth quoting:

“Well, I just don’t know the reason
I don’t know what to say
it just seems a normal day
and I’ve got to live my own life
I just can’t spare the time."


PS.  I'm presently seeking feedback on this blogsite.  Please take a moment to fill in the brief survey with Survey Monkey.  The link is at the top of the page on the right.  Thank you.
Posted by bruce meder at 21:05