Cotton-on: (intrasitive verb) To understand, to finally make sense of.

Recently though, a newly made friend and owner of a boutique shop that sells clothing made with hemp, bamboo and other natural products alerted me to some downsides to the cotton industry.

So, I’m delighted to post here a blog from her that discusses some of these issues. For my first ever guest blog I’d like to introduce Charlotte French who owns and operates (with her husband) the Greenroom Gallery.  What follows is her blogpiece.


The Problem with Cotton (Part 1) 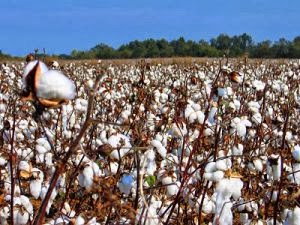 A few years ago, my eyes were opened to the conventional cotton industry. I couldn’t believe how troublesome it is. Within a few hours of research on the net, I made a decision to not buy cotton again, unless it was grown certified organic. I have been meaning to write about cotton for a long time so here’s a little about the problem with the ‘White Gold’. Before I go any further though, please note, I am not a scientist but rather someone who’s trying really hard to sort through endless information, coloured by different parties invested interests.    It’s not only humans that like cotton. There are different kinds of worms, weevils, aphids, mites, thrips, caterpillars, loopers and bugs that love cotton. Not surprisingly cotton is known as a dirty crop. It uses more pesticides than any other crop. The world’s cotton crop is only 2,5 % of everything that gets harvested. However these 2,5 % demands 16% of all pesticides. Some of the most toxic chemicals in the world are used to kill all these creepy crawlies. Stuff like Cyanide, Dicofol, Naled, Propargite, and Trifluralin which are all KNOWN cancer-causing chemicals.The World Health Organisation has estimated that 20,000 people die annually from pesticide misuse with at least one million requiring hospitalisation. Aldicarb, the world’s second biggest selling pesticide is classified as extremely hazardous by the World Health Organisation. One drop absorbed through the skin is enough to kill an adult, yet this pesticide is still widely used in cotton production. Most pesticides are applied in developing countries, where farmers often lack the equipment, information and training to handle pesticides effectively.    After years of dangerous pesticide use in Uzbekistan, the population of the region of Karakalpakstan face a host of appalling health problems. Malnutrition is rife as vegetables will no longer grow in the polluted soil; 99% of pregnant women suffer from anaemia and rates of throat cancer are the highest in the world. Scientists have found a level of DNA mutation 3.5 times higher than normal — meaning health problems could be around for generations.   Synthetic fertilisers are also a huge problem.  Nitrogen synthetic fertilizers are a major contributor to increased N2O emissions, which are 300 times more potent than CO2 as greenhouse gas. Genetically modified (GM) is seen by many as an answer to this problem with pests and pesticides. GM cotton is used worldwide with the main seed supplier being Monsanto. In Australia GM cotton was introduced in 1996 and today 90% of all cotton grown in OZ is genetically modified. BT (biotechnology), the fastest and most controversial change in agricultural history has helped to a degree in decreasing the pesticides. In BT cotton, the insecticide is always present in the plant rather than applied in periodic spraying sessions. There is fear however that this may lead to rapid rates of pest immunities and possibly produce super pests. In some parts of the world GM cotton has got rid of certain pests but opened the door to others that become an even bigger problem. The whole GM industry is still very much developing and controversial. I must admit that I don’t know near enough on this subject so I shall leave GM cotton for now.    Cotton is also the world’s thirstiest crop. Three litres are needed for one cotton bud. One pair of jeans requires 8,000 litres of water; a 250 gram shirt needs 2495 litres. Local water supplies are threatened by excessive abstraction for cotton cultivation. The Aral Sea was the world’s fourth largest lake, but it has shrunk to 90 per cent of its former size in the last 50 years as the rivers that fed it have been diverted to boost cotton production. A desert of salty sand remains, and the fishing industry has been devastated. (See Below) 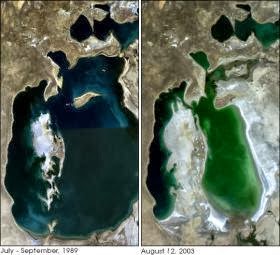 Surveys show that rural cotton farmers lack the necessary safety equipment, protective clothing, and training for handling hazardous pesticides. They may store pesticides in their bedrooms or in close proximity to their food and some even reuse pesticide containers for drinking water. These farmers and their families are at highest risk for acute pesticide poisoning as well as chronic effects. Sometimes change must come in small steps. Here’s a long and excellent article reporting from Pakistan, well worth the read.     http://www.telegraph.co.uk/journalists/sally-williams/8592326/How-Pakistans-farmers-are-cleaning-up-cotton.html  The Problem with cotton is to be continued…………  Thanks Charlotte (ed).