It Was Fifty Years Ago Today (Limits To Growth) 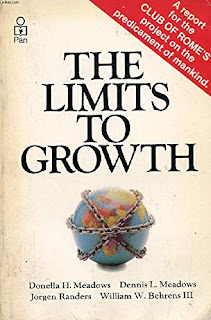 We’ve long known it may come to this. At least fifty years anyway. Half a century.


On 2nd March 1972 a landmark book was published. Limits To Growth1 alerted the world to the possibility of collapse by the end of the 21st century.

Led by systems thinker Donnella Meadows, the team behind the publication drew on the power of computers (albeit miniscule compared to today’s technology) to run a number of scenarios for the future of the planet and humankind.

One of those scenarios - the ‘standard model’ (later referred to as ‘Business As Usual’) - tracked what may happen if humanity continued on the course it had been on. That scenario foresaw worsening pollution, food shortages, resource depletion, and industrial output plummet. Perhaps unsurprisingly, the world continued on with that business as usual model over the following fifty years since publication. Now, we are witnessing the sad results of that indifference.

Furthermore, by manipulating the model with the doubling of resources, unlimited resources, pollution control, birth control, and similar mechanical/technological possibilities, the outcome was not much dissimilar to that of the standard model. In other words, “solving” our way out of the coming predicament using the thinking of the past, just would not work.

The authors of Limits To Growth came to three conclusions (pp 23/24):

1. The limits to growth on the planet will be reached sometime within the next 100 years. The most probable result will be rather sudden and uncontrollable decline in both population and industrial capacity.

2. It is possible to alter these growth trends and to establish a condition of ecological and economic stability that is sustainable far into the future.

3. If the world’s people decide to strive for the second outcome rather than the first, the sooner they begin working to attain it, the greater will be the chance of their success.

Around the time of the publication of Limits To Growth a number of other significant books were also published.2 The modern-day environmental movement was being born. Friends Of the Earth (FOE) and Greenpeace were both founded in Canada in 1969 and 1971 respectively. The world’s first nationally based environmental party (the New Zealand Values Party) was founded in 1972, informed greatly by Limits To Growth.

What was the core message? Very simply, that continued exponential growth in a system must, at some stage, come up against limits. Attempting to bypass or deny those limits results in collapse of the system.

We are half-way through the 100 year timespan that Limits To Growth extrapolated. The authors 50 years ago exhorted humanity to work on a sustainable option as soon as possible.

In a recent (22 Feb 2022) interview (inspired by the coming 50th anniversary of the book) Dennis Meadows (one of the original authors, now 80 years old) had a prescient warning:

“Now it’s clear that the scale of human activities is far, far above the limit. And our goal is not to slow down, but to get back down.”3

A few agree with him – the de-growth movement for example. There are others who would now suggest that we do not have even those 50 years left.

1. Meadows, Meadows, Randers, Behrens III, The Limits To Growth: A Report to the Club of Rome’s Project on the Predicament of Mankind, Universe Books, New York, 1972