3 Reasons To Doubt Selfishness Of Humans 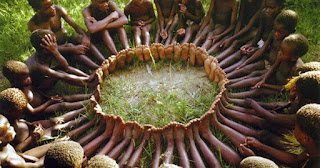 There is a prevailing notion that humans are basically selfish. Our behaviour and actions are motivated primarily by self-interest, this view says.

In common with many answers to questions of this type, the answer here is yes, and no. It is only partially true. However, it is also predominantly wrong.

Within westernised cultures the concept of self and individualism is well established. So well established, in fact, that the idea that we are selfish by nature is entrenched within our cultural psyche.

There are however, at least three reasons for doubting the universality of this notion. 1. Other cultures and spiritual traditions are more cooperatively focused. 2. Recent research suggests an inherent cooperative bias. 3. The idea shows little imagination on our part.

Other Cultures and Spiritual Traditions

Many indigenous and nature-based cultures show a greater sense of cooperation than do westernised cultures. In such cultures the self is often synonymous with us and a collective approach to life.

Within the Zulu culture the word ubuntu describes such an identification. Bishop Tutu defines ubuntu as "the philosophy and belief that a person is only a person through other people.  In other words, we are human only in relation to other humans.  Our humanity is bound up in one another… This interconnectedness is the very root of who we are."1

This idea of the self being bound up with others is revealed also in the concept of interbeing – a word coined by Vietnamese Buddhist monk Thich Nhat Hanh. He describes this idea as “the many in the one and the one containing the many.” In a nod to Descartes, he goes on to say that interbeing can be expressed as: “I am, therefore you are. You are, therefore I am. We inter-are.”2

Just as Thich Nhat Hanh gives a nod to Descartes, so does Stefan Klein give a nod to Darwin, titling his 2014 book Survival of the Nicest.3 Noting that sharing and fairness occurs freely within children, he concludes that “If this inclination to fairness appears at such an early age, it is highly likely that it is innate.”

Klein further suggests, convincingly, that humans developed the social intelligence of cooperation before abstract and language intelligence. “We humans became first the friendliest and then the most intelligent apes,” he asserts.

Researchers within Evolutionary Dynamics and Psychology at Harvard University published an interesting paper in Nature in September 2012.4 In studies involving almost 2,000 people they tracked the difference in cooperative decision-making versus self-interested decision making. The research looked at the speed of decision-making, recognising that quick decisions are more likely to be instinctive and/or intuitive, whereas longer, more considered decision-making tended to be rational.

In all cases faster decision-making was significantly more likely to show a cooperative outcome than a self-interested outcome, and vice versa.

Instinctual and intuitive responses are more likely to demonstrate an innate trait than are more considered responses. Hence, it can be claimed, as the researchers here did, that, “Our results provide convergent evidence that intuition supports cooperation in social dilemmas, and that reflection can undermine these cooperative impulses.”

As suggested earlier, the notion that humans are innately selfish is entrenched within our (westernised) cultural psyche. So much so that we find it difficult to imagine that it may be otherwise. In our popular literature, on the big screen, and elsewhere, we see and read of images of stone age humans brutalising one another, invading and occupying another clans territory. We don’t stop to question this. It has always been this way – hasn’t it?

Albert Einstein noted that imagination is more important than knowledge. Our ability to imagine is often the precursor to a deeper enquiry into phenomena or problems. Imagination is certainly the inspiration for questioning.

One person who did imagine a more cooperative inner nature was the Tibetan monk, Chögyam Trungpa Rinpoche. In 1976 this monk brought the Shambhala Vision to the attention of the western world. The vision included Shambhala warriors, although the Tibetan word, pawo (translated into English as warrior) more correctly means one who is brave.

Chögyam Trungpa explains that within this vision bravery means not being afraid of oneself. He explains:5

“The Shambhala vision is the opposite of selfishness. When we are afraid of ourselves and afraid of the seeming threat that the world presents, then we become extremely selfish. We want to build our own little nests, our own little cocoons, so that we can live by ourselves in a more secure way.”

Can we do it? Can we be brave? Can we be unafraid of ourselves? Can we imagine a cooperative innateness?

We can, and we must.

3. Stefan Klein, Survival of the Nicest, Scribe Publications, Victoria (Australia) and London, 2014. Note also that the phrase ‘survival of the fittest’ was not used by Darwin, although many assume it was.