Now, Where Did We Put That Monkey Wrench? 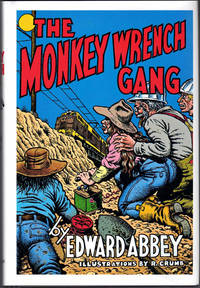 A lot of ground-breaking environmentally themed books were published in the early – mid 1970s. Many of them pointed towards a future that was unsustainable if the current “business as usual” model was pursued.

One fictional book narrated the story of reaction against the environmental destruction going on in the Southwestern United States. Edward Abbey’s The Monkey Wrench Gang (published in 1975)1 told the story of an unlikely gang of four that included a river guide, a surgeon, a Jewish feminist, and a Vietnam vet. Their mission was to sabotage and destroy the machinery (bulldozers, trains etc) that were being used to lay waste to the environment.

Significantly, Edward Abbey dedicated the book to Ned Ludd, the semi-mythical weaver in England who smashed a couple of weaving frames in 1779. His name is now synonymous with the term Luddite.

To be called a Luddite today is often taken as a pejorative and derisive term.

Yet, we could ask today, for the sake of the environment; where are you Ned Ludd when we need you? Or, we could give a call out to the Monkey Wrench Gang and plea for their assistance.

More so than in 1779, and even more than in 1975, the world today is beset by techno-addiction: a term coined by eco-psychologist Chellis Glendinning in 1994.2

Much technological invention and innovation has brought us to the life-threatening predicaments we currently face. Sadly, the solutions being offered are more of the same - more technology. And woefully, “green technology” only keeps us trapped within the same techno-addiction.

We could be like the Monkey Wrench Gang or Ned Ludd and smash technology. However, that would be analogous to an alcoholic who smashes a bottle of beer so that the beer is unavailable, yet walks into a bottle store the next day to buy another dozen bottles.

Like the alcoholic, we need to address our addiction. And that requires a lot of work.