Will The Last Human Plant A Tree?

There is an Indian saying: “Blessed is the one who plants trees under whose shade they will never sit.” 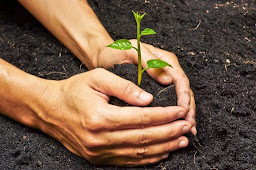 And if we take the time to read the research then we will realise that we are in what has been termed the “Sixth Extinction.”  The fifth extinction took place approximately 65 million years ago, famously wiping out the dinosaurs and killed around half of all life on the planet.  The extinction period is considered to have lasted between 1 and 2 ½ million years.  Famously, it is also thought to have been caused by an external event – the impact of a meteor up to 80km in diameter and delivering an energy equivalent to 21 – 960 billion Hiroshima sized bombs.

The Sixth Extinction could take much less than this amount of time, and without such a massive fireball of energy.  It just requires us humans continuing to do what we are doing.

Over the course of the past century or two our impact upon the earth has been to increase the background extinction rate by 100 – 1,000 times the usual rate.  Yet, if we look at the list of those species that have already gone extinct, and if we consider the extinction list of species that will become extinct, we often miss noticing one particular species on that list.  Homo sapiens.  Us, yes, we humans are on that list of species likely to become extinct.

No matter what we do there will be nothing we can do to control the runaway.

We have no solutions.

We have no hope.

What do we do?  First, continuing our destructive, affluent, mindless, exploitative lifestyles cannot continue.  We must stop.

Then, when we stop, we will perhaps discover that there is a grief in our knowledge.  This is to be expected, for “grief is a way of loving what has slipped from view.  Love is a way of grieving that which has not yet done so.”1   Stephen Jenkinson eloquently reminds us that grief and love are intimately entwined.

Stephen Jenkinson is a Canadian and one of his compatriots, Leonard Cohen, made a prescient observation in his song Boogie Street, when he sang:

“It was in love that we are made,

In love we disappear.”2

We could turn our disappearing - our extinction – into a time to rediscover and re-connect with the noble aspects of our humanity: love, compassion, kindness, empathy.

Am I suggesting giving up hope?  Yes, for hope is a hopeless cause (if you’ll excuse the quip.)

I am however, suggesting we act as if our grief and our love (for ourselves, for others, for the planet) are real and palpable.

So, when the last human is about to die, will they plant a tree?