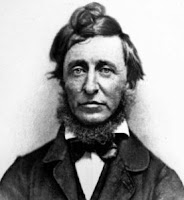 This week (12 July 2017) marks the 200th birthday of Henry David Thoreau.  Thoreau is generally acknowledged as one of the prominent forerunners of the modern day environmental and simplicity movements.  He also influenced many of the great civil disobedience activists such as Tolstoy, Gandhi and Martin Luther King.  The anarchist movement also claims him as an ancestor, although his writings are sometimes a bit ambiguous in this regard.

To acknowledge Thoreau Rainbow Juice decided to interview him on his 200th birthday.  What follows is a (fictional) transcript of that interview, using Thoreau’s own (italicised) words from his many writings.1

Henry David Thoreau:  You may, and I thank you for the felicitations.

RJ:  Henry, you have been described as a forerunner of today’s environmental movement.  When you look around at the world today, 200 years after your birth, do you have any observations to make?

HDT:  I do.  Here is this vast, savage, howling mother of ours, Nature, lying all around, with such beauty, and such affection for her children, as the leopard; and yet we are so early weaned from her breast to society, to that culture which is exclusively an interaction of human on human, – a sort of breeding in and in, which produces at most a merely English nobility, a civilisation destined to have a speedy limit.  I believe that there is a subtle magnetism in Nature, which, if we unconsciously yield to it, will direct us aright.  Yet, adults become disconnected.  Girls and boys and young women generally seem glad to be in the woods.  They look in the pond and at the flowers, and improve their time.  Men of business, even farmers, think only of solitude and employment, and of the great distance at which I dwell from something or other; and although they say that they love a ramble in the woods occasionally, it is obvious that they do not.

RJ:  You speak of a civilisation destined to have a speedy limit.  Do you think that limit is closer now than at your time?

HDT: I cannot say whether we are closer to that limit, however, I will say that in Wildness is the preservation of the World.  All good things are wild and free.  There is something in a strain of music, whether produced by an instrument or by the human voice, which by its wildness, to speak without satire, reminds me of the cries emitted by wild beasts in their native forests.  It is so much of their wildness that I can understand.  Give me for my friends and neighbours wild people, not tame ones.  I would also say that if a person walks in the woods for love of them half of each day, they are in danger of being regarded as a loafer; but if they spend the whole day as a speculator, shearing off these woods and making earth bald before her time, they are esteemed an industrious and enterprising citizen.  As if a town had no interest in its forests but to cut them down.

RJ:  So, you’re saying that we should calm down, take it easy, enjoy the woods and Nature.  And, in doing so we might discover something about ourselves?

HDT:  Indeed so.  This world is a place of business.  What an infinite bustle!  I am awakened almost every night by the panting of the locomotive.  It disrupts my dreams.  There is no sabbath.  It would be glorious to see mankind at leisure for once.  It is nothing but work, work, work.  I cannot easily buy a blank-book to write thoughts in; they are commonly ruled for dollars and cents.  If I were to offer one piece of advice it would be this: You must live in the present, launch yourself on every wave, find your eternity in each moment.  But lo! people have become the tools of their tools.  We no longer camp as for the night, but have settled down on the earth and forgotten heaven.

RJ:  Thank you.  You mention becoming tools of our tools.  You might have noticed how many people today are hastening around with tools stuck in their ears or their eyes gazing at a tool in the palm of their hands.  And those are just the more blatant examples of our tool-bearing culture.  Is there anything further you would like to say about tools and technology?

HDT:  Our inventions are wont to be pretty toys, which distract our attention from serious things.  They are but improved means to an unimproved end, an end which it was already but too easy to arrive at.  Why should we live with such hurry and waste of life?  We are determined to be starved before we are hungry.  Most of the luxuries, and many of the so-called comforts of life, are not only not indispensable, but positive hindrances to the elevation of mankind.  People say that a stitch in time saves nine, and so they take a thousand stitches to-day to save nine tomorrow.  When we are unhurried and wise, we perceive that only great and worthy things have any permanent and absolute existence, that petty fears and petty pleasures are but the shadow of the reality.  By consenting to be deceived by shows, people establish and confirm their daily life of routine and habit everywhere, which still is built on purely illusory foundations.  Children, who play life, discern its true law and relations more clearly than adults, who fail to live it worthily, but who think that they are wiser by experience, that is, by failure.

HDT:  You make it sound so easy.  You seem to be suggesting that we re-discover our childhood innocence and take it easy on ourselves, and in the doing of that we will naturally take it easier on the earth.  What is the essential message you would have for those of us living 200 years after your birth?

HDT:  Simplify, simplify.  I am convinced, both by faith and experience, that to maintain one’s self on this earth is not a hardship, but a pastime, if we will live simply and wisely.  It is only when we forget all our learning that we begin to know.  I have always been regretting that I was not as wise as the day I was born.

RJ:  How do you suggest we begin to forget?

HDT:  First, it is not what you look at that matters, it’s what you see.  It is a matter of shifting consciousness.  Once you can do that you will find that by living your beliefs you can turn the world around.

1. Some of the works from which Thoreau’s italicised words are taken include:  Walden (1854), Walking (1862), Life Without Principle (1863), Autumnal Tints (1867).  Thoreau wrote many other works for publications and magazines as well as the highly influential Civil Disobedience (1849)
Posted by bruce meder at 16:06