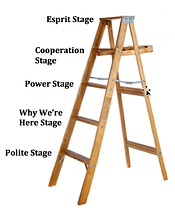 Anyone who gets into community development, social justice or other community work will end up working in groups.  An understanding of group dynamics and group processes can be beneficial.  There are many models that attempt to describe or explain the stages of a group coming together (being born), living together and ending.  One of the earliest, and still useful, is Cog’s Ladder – a model proposed by George O. Charrier (hence the c.o.g.) in 1972 when he was an employee of Proctor and Gamble.

Cog’s Ladder has five stages:
Let’s look at each of these stages briefly.

This initial stage is marked by cordiality, simplicity, lack of controversy, and (of course) politeness.  It is a time for group members to acquaint themselves with one another, or perhaps to become re-acquainted.  Most individuals in the group are keen to be liked and not cause waves.  Self-disclosure is kept to a minimum and ideas and actions are simple ones.

In this stage people begin to leave aside their concerns about being liked to focus more on the purpose of the group.  There can be much discussion about group goals, agendas, and processes.  If a facilitator or leader is not already present, one may emerge at this stage who will set agendas and the topics for meeting and discussion.  It may also be a stage in which cliques begin to form, although often not rigidly so.  On a personal level, it is the stage at which people will begin to feel that they “fit in” and that the group is one they wish to remain part of.  This stage can see some members drift away.

This is the stage that requires patience and tolerance to get through.  It is the stage at which some group members may attempt to convince, or coerce, others into adopting their solution or way ahead.  There are bids for control of leadership of the group, with others forming alliances around the various power-players.  Many may go silent in this stage, wishing to stay out of the power games.  Conflict in the group rises and decisions taken in this stage may not be optimal.  The unity of the group that seemed to be emerging in the earlier stages dissipates and there is little sense of group identity.  For a facilitator of group processes this is possibly the stage at which your knowledge, skills and wisdom will be at their most useful.  Using this model can help a facilitator remain focused, at ease, and not get caught in a “what the hell is going on” merry-go-round.  it is not a time for a facilitator to step in and save a group.  Doing so could well back-fire.   The needs of the group at this stage are wide and include individual and group needs.  Individually, people may be in need of reassurance, acceptance, being heard.  The group may be in need of reframing its purpose, defining its structure, sharing of skills.

If a group can enter into a problem-solving mindset towards the end of the previous stage then it will be ready and willing to the cooperative stage.  In this stage, the conflicts of the previous stage are seen as opportunities to learn and to improve rather than as win-lose power battles.  A sense of group identity emerges, and leadership begins to be shared.  Solutions and decisions are better developed in this stage.  Solutions posed in the power stage that were initially rejected or resisted, may re-surface in this stage and be creatively explored.  Hallmarks of this stage are greater levels of listening and accepting of differences.  Once a group gets to this stage it is difficult for new members to fit in and be accepted.  To enable new members to fit in a group may need to go back to an earlier stage and repeat those stages.  Induction and/or mentoring practices may be of assistance in enabling new members to join without the need for the group to go back to earlier stages.

The French word esprit means the quality of being lively, vivacious or witty.  Such liveliness certainly captures the sense of this stage well.  It is a stage at which groups feel as if they could do anything – almost take-on-the-world.  Not all groups reach this stage.  In order to get here they usually must pass through the previous four, including the power stage.  Once at this stage, the sense of cohesion is at a peak with contributions from members building on the contributions of others.  Creativity is high and the group often achieves more than it ever expected to.  Loyalty levels are high and the sense of satisfaction and achievement for individual members can be significant.  It is almost impossible for new members to join at this stage without the group having to go back to an earlier stage.

Do you recognise these stages?  Have you experienced a group, or groups, that have attained the Esprit Stage?  For a facilitator of group processes and understanding of these stages can be useful.  Remember, however, that this is only a model of group process.  It works well – unless it doesn’t.  There will be times when it doesn’t.  That is the magic of human group processes.  None are ever the same, and none can ever be predicted in advance.  Where this model is useful is in allowing us to become comfortable with a process, including during the times of conflict, turmoil and disruption, knowing that we are all on the same journey.


Play with the ideas, and if you find them useful, it may even be worth outlining this model to a newly formed group early in its life so that group members are also more comfortable with the journey.
Posted by bruce meder at 14:36