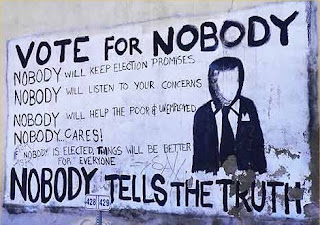 Every few years we head to the local church hall or community centre.  We get handed a slip of paper and are pointed to a private cubicle in which there are pens with which we can put marks on the paper we’ve just been handed.  We dutifully place our ticks or crosses on the sheet, leave the cubicle and drop the slip of paper into a box with a slit in the top.  Our slip of paper drops into the box and mingles with hundreds of other, similar, slips of paper.  We leave the hall and go back to our homes, our jobs, our families, our lives.

We have just voted.

What have we done in those few minutes that we were inside the polling booth?  Some say we have exercised our power.  Some say we have done our civic duty.  Others claim it as our democratic right.  Still others suggest that it is a waste of time.  Have we achieved what we intend?  And, what really is our intention?

In the western world power was wrested away from the monarchs and landed gentry and placed within the hands of ordinary people in what we call democracy.  And it did what we intended it to do – at least for awhile.  But, can we truly say that democracy fulfils our intentions today?  Take a good long hard look at democracy and we may just find that we have to answer that question with a resounding NO!

When we vote we are voting not for the wellbeing of all of us, we are voting for power.  We vote for ideologies.  We are voting so that one political party can win, and the others lose.  We are voting for winners and losers.  No longer are we part of “we the people” – we are now caught in the trap of dualistic power plays: National/Labour, Republican/Democrat, Liberal/Conservative, Tories/Whigs.  If we are part of the majority then we come out as the winners.  We shout and rejoice.  If not, we are losers.  What happens to the losers in our current democratic system?  More so, what happens to the minorities who cannot even aspire to being losers?  Often they are completely excluded.

In a winners/losers game what happens to the intention of wellbeing for all?  It is sidelined, and mostly completely ignored.  The winners come to power to implement their agenda.  A big part of that agenda is to gain more power, or at least the chance of more power at the next election.  The best that can be achieved in terms of wellbeing for all under that scenario is short-term decision making.  Decisions are made with the intention of consolidating support from those who are likely to vote for the winners at the next election.  Hardly a scenario for healthy long-term planning and decision-making.

Yet, we remain devoted to voting.

Democracy is No Longer Representative

Yet we continue our devotion to voting.

Democracy should not be considered a static thing.  Democracy can, and should, evolve and change.  Unfortunately, it is presently moving in unhelpful and unhealthy ways.  No longer are we the people exercising our power – we are throwing it away.  No longer are we doing our civic duty - big money and big business are draining democracy of any civics that may have been there.

What then to do in the face of the collapse of representative democracy?  Campaigns to get people out to vote are only going to exacerbate the problem.  People are deserting the voting system in increasing numbers – certainly in the western democracies.  Many would claim this is because of widespread apathy.  Maybe it is, maybe it isn’t.  What if the decline in voter turnout is due to dissatisfaction and disgruntlement with politics, politicians and the voting system itself.  There is evidence to suggest this may be the case.

If it is the latter, then what are the next steps for the democratic journey?  This site has previously suggested sortition (the selection of decision-makers by lot) as worthy of consideration.  Previous posts can be see here, here, here, and here.


In the meantime we will need to let go of representative democracy, reject electoral politics, and give up our devotion to voting.
Posted by bruce meder at 14:49