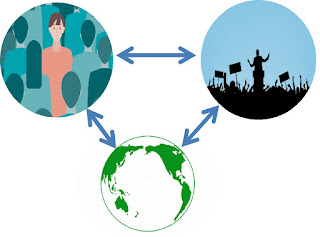 “The personal is political,” became one of the catch-phrases of the feminist movement of the 1960s and 70s.  The slogan caught on after an article written by Carol Hanisch was published in 1969.

Prior to the feminist movement of that time, issues such as childcare, household labour, and problems like depression and anxiety, where considered purely personal or private in nature.  They had nothing to do with politics.  Hanisch’s article and the feminist movement as a whole challenged this, and reframed the very notion of politics.

Before continuing, lets stop to consider the meaning of political.  Too often, “political” gets constrained within terms of political parties, parliaments, Prime Ministers, politicians, elections etc.  The word politics however, comes from the Greek polis meaning the community of citizens of a city or city-state.

Politics then involves all of us.  It is a collective term.  We could describe politics as being the process by which a community or society makes decisions for its collective well-being or sustainability.

As such, we are all political beings.1

With this understanding it becomes clear that indeed, the personal IS political.  It is not a one-way effect though: the political is also personal.

Our personal behaviours and actions have an effect upon our environment.  Our collective decisions have effects also.

The relatively new theories of chaos and complexity show that very small inputs to a system can have enormous results, and often these results are unpredictable and possibly even difficult to associate with the initial small input.

Such is the complexity, intricacy, and connectivity of all aspects of the world – the personal, the political, and the planetary.

Recognising and understanding these three ‘P’s is like knowing how a two edged sword works – it cuts both ways.

Our choices matter.  Our personal choices may be just as significant as our collective political choices.  What we choose to do in one arena has an influence upon what is done in another.

There are some who contend that individual (personal) actions are insignificant (almost of no value) and that only systematic (political) change will make a difference.  Others suggest that the only thing we can do is act as individuals.

Understanding the connection between the Personal, the Political, and the Planetary gives us another insight – one in which everything matters, everything influences everything else.

This last point may only just be coming to be realised in western thought.  Buddhism and other eastern philosophies have known this for centuries.  Buddhism calls it dependent arising.

Note:
1. Even to say that one is apolitical or non-political is still to make a political statement, and is an act that has collective impact.
Posted by bruce meder at 16:14