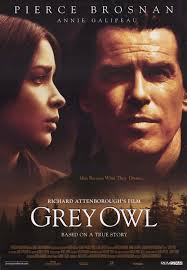 During the 1930s an Englishman, Archibald Belaney, masquerading as a Native American, mesmerised audiences numbering in their hundreds with stories of life in the Canadian wilderness and a plea for the beaver amongst other environmental messages.

Over sixty years later (in 1999) Richard Attenborough directed a film based on Grey Owl’s life.  Attenborough was perhaps destined to have directed this film (“Grey Owl”), as he had queued with his brother (the noted naturalist David Attenborough) for hours outside the De Montford Hall in Leicester in 1936 to see and listen to Grey Owl.

The movie is a well-paced and easily accessible glimpse of the life of an intriguing man.  The film depicts Grey Owl’s (played by Pierce Brosnan of James Bond fame) life from his latter days as a trapper through to his hugely successful lecture tours in England and America.  He meets a woman with Iroquois ancestry, Anahareo or “Pony”, with whom he, reluctantly at first, cohabits.  Pony encourages Grey Owl to leave his trapping and to take on a greater environmental vision.  It is this environmental vision that Grey Owl speaks of in his public lectures, dressed in Native American costume complete with full war bonnet of eagle feathers.

Attenborough describes Grey Owl as a “major charismatic figure” and Brosnan declares that the “film is very timely.”  Indeed, it is.  The message that Grey Owl brought to the world’s attention in the 1930s is as much needed today as it was then.

Towards the end of the movie Grey Owl strips away his outward trappings and lays bare the essence of his message:


“We’re not the Lords of the Earth – we are it’s children… If we can say that there are some things that are not for sale, that there are some things that belong to all of us and to future generations, then maybe other people will hear us and they will begin to say it too.  Some day there will be enough of us and we’ll believe that it can be done, that we can begin to change the world.”

Grey Owl is finally unmasked by a journalist who asks him to tell his story.  Archie Belaney replies that he was “just a kid with a dream of living in the wilderness.”  The journalist responds: “that's a fine dream.”  So it is!  Archie Belaney (aka Grey Owl) went and lived it.

Find a copy of “Grey Owl” in your local video parlour, rent it, watch it, dream it, live it.
Posted by bruce meder at 10:17