Let’s Not Cop Out

This week (beginning 30 November 2015) COP21 began in Paris.  COP being the Conference Of Parties, an annual gathering of the parties to the United Nations Framework Convention on Climate Change, adopted in 1992.  The avowed aim of this conference is to achieve a legally binding and universal agreement on climate, with the aim of keeping global warming below 2°C.

Some are claiming that 2°C is too great a warming.  Significantly, it is the least developed nations calling for a target of 1.5°C.  Mr Giza Gaspar-Martins, from Angola, and chair of the Least Developed Countries (LDCs) group said:


“The current plans to mitigate greenhouse gas emissions do not keep the world within the ‘safe’ temperature rise of 2°C. But from a Least Developed Country perspective, it is far worse than that. For the LDCs, economic development, regional food security, ecosystems, and the very survival of their populations and livelihoods are at risk if talks aim only for a 2°C world.”

Gaspar-Martins and the poorest nations of the world are supported by the Alliance Of Small Island States (AOSIS), who are already suffering the effects of sea level rise.  The chair of the Alliance, Thoriq Ibrahim from the Maldives1 had this to say:


“Slower onset events like sea level rise and ocean acidification continue to assault our small states. Climate change in all its forms is a new reality for us and it is getting worse.”

He went on to say that


“a long-term temperature goal of well below 1.5 degrees must be reflected in the Paris Agreement, along with an indicative pathway for achieving it, including urgent peaking and deep mid-century emissions reductions.”

Those of us in the western-styled, rich nations of the world must take note.  It is the poor nations and the small island states that are experiencing the worst effects of climate change, yet they are the nations contributing the least to this change.  A simple graph plotting per capita GDP against per capita greenhouse gas emissions (GHG) is very telling. 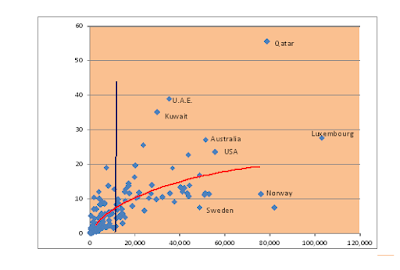 In this graph the horizontal axis represents per capita GDP in US dollars and the vertical axis per capita tonnes of GHGs.  The vertical blue line marks a per capita GDP of $10,000 US – one hundred and twenty nations lie to the left of this line!  The graph is a scatter diagram with the red line representing the “line of best fit” showing the rough correlation between GDP and GHG emissions.

Telling, isn’t it?  Clearly, it is the rich nations that contribute most significantly towards GHG emissions and therefore climate change.

We must face it – it is our consumption patterns that contribute to climate change.  It is those of us in the western-styled, rich nations that continue to consume in great, excessive, obscene levels; who condemn those living in poor nations and small island states to the ravages of climate change.

Let’s not cop out.

1. The average height of the Maldives is just 1.2 metres above sea level, and the highest point is only 2.4m above sea level, making this nation the most vulnerable to sea level rise.
2. This 20% consume:  45% of all meat and fish,  58% of the total energy, 84% of all paper, have 74% of all telephone lines, and own 87% of the world's vehicle fleet.  (Source, worldcentric.org accessed 1-12-15)
3. Cop out is a slang term meaning to avoid or shirk responsibility, to fail to fulfil a commitment, or to provide an evasive excuse.
Posted by bruce meder at 15:48