Beasts and Gods (A Review) 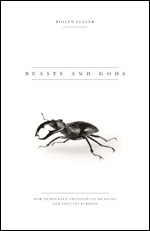 Democracy:  the hallmark of a civilised society, the pinnacle of our search for equality and freedom, the best political system ever devised.  Well, not according to Roslyn Fuller.

In Beasts and Gods: How democracy changed it’s meaning and lost it’s purpose,1 Roslyn Fuller picks through our democratic claims to fairness, equality, freedom, and representation; and finds all of them wanting.

Fuller presents a compelling case against our electoral/representative democracy.  Using case studies from all over the world, plus devastating statistics, Fuller shows how modern democracy has enabled those with wealth to obtain political power, and then those with political power to gain more wealth.  Simultaneously, the rest of society are excluded from public decision-making and not even represented in the process.

With clear examples Fuller unpicks many of the myths that continue to support our hold on electoral democracy as a sacrosanct institution.
Fixing It

It would seem that democracy is broken and that we need to fix it.  But, asserts Fuller, what we have is not even democracy.  It doesn’t even derive it’s identity from Athens where we have been taught it comes from.  Our present system finds its roots in another city and another system – the oligarchic Roman Republic.  Whatsmore, Rome decayed from the inside and there are signs that our current electoral system is doing the same, for the same reasons.

So, what does Fuller suggest we do?  Look to the true source of democracy she replies: Athenian demo-kratia, literally "people power."  The Athenians had already tried elections and had discarded them as being not democratic enough.  They brought in two new elements in public dialogue and decision-making: the Assembly and the cleroterion.

Most of us will have heard of the Assembly, whereby any Athenian citizen2 could turn up to participate in public discourse and decision-making.  Up to 15% of those eligible did so, a far cry from the 0.01% (or less) that make up most of the parliaments of electoral democracies today.  However, many of us will not have heard of the cleroterion.  It was a simple piece of technology that allowed for a very simple method of selecting public officials randomly.  Yes, randomly, much like a lotto system today.3

The Athenian democratic system had  a lot going for it, according to Fuller.  It was fair, it was representative, it was equal, it provided for freedom.  Most of all, it was – democratic.

But, can it work today?  Why not, replies Fuller.  She describes a number of already existing technologies and processes that enable the use of both direct democracy and random selection.  For example:
Fuller’s book is a welcome addition to the discussion about the future of democracy.  If this review does nothing more than whet the appetite for those thinking about running for political office in order to change something to read this book first, then it will have done it’s job.  As Fuller asserts, it is not that we need to find alternative candidates to vote for:


“We simply need to create a parallel politics that encourages real democracy.  Indeed, when one is locked into a self-perpetuating system, which is what the electoral representative system is, this is the only approach that really has any chance of success.”

That is something that we can all do.  First though, get a hold of this important book and read it.  It will change the way you think about democracy.

1. Roslyn Fuller, Beasts and Gods: How democracy changed it’s meaning and lost it’s purpose, Zed Books, London, 2015
2. At the time (6th to 4th centuries BC) citizenship in Athens did not include women, slaves, children or metics (Foreigners residing in Athens).  However, such criticism does not deny the basic democratic ideas.  We must remember that even our electoral system has only allowed women to vote since the early part of the 20th century, and many indigenous people have been disenfranchised until very recently.
3.  Indeed, the cleroterion bore an uncanny resemblance to modern day lotto machines.
Posted by bruce meder at 15:05