2014.  One century on from the beginning of World War I – which had been touted as the war to end all wars.  It is fitting then to begin this years series of blogs with a review of War Is Over - Yoko Ono’s exhibition at the Museum of Contemporary Art in Sydney.

Ono is no stranger to war.  As a 12 year old living in Japan she lived through the atomic devastation of Hiroshima and Nagasaki.  It was during another war, the Vietnam War, in the 1960s that Ono produced some of her well-known anti-war art, some of which are installed in this exhibition.  The exhibition covers from that time through to some more recent pieces.

Much of her art is interactive.  One such piece is Play It By Trust in which viewers sit down at a chess board with their white pieces arrayed in front of them.  Another viewer sits on the opposite side of the board also with their chess pieces arrayed in front of them – also white.  Thus, as the game progresses it becomes difficult to tell which chess pieces belong to which player.
Ono describes Play It By Trust as


“lead(ing) to a shared understanding of (our) mutual concerns and a new relationship based on empathy rather than opposition.  Peace is then attained on a small scale.” 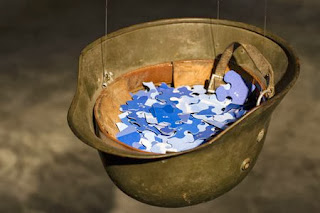 Another piece (Ono often puns the words piece and peace) designed to illicit our interconnections is Helmets – Pieces of the Sky.  A number of WW II helmets hang upside down in the gallery space, each containing dozens of jigsaw pieces of sky and clouds.  Viewers are invited to take a piece of jigsaw with them and reflect on the notion that we all hold a piece of the giant jigsaw that when assembled creates a beautiful skyscape.

The title of Ono’s exhibition is a reference to the campaign that she and her husband, John Lennon, organised between 1969 and 1971 to end war.  Today there are around 30 or more nations involved in some sort of war.  War has not ended.

With this in mind it is worth reading the fine print in the exhibition title.  Below the words War Is Over are four words in much smaller type: If you want it.

No matter what you think of Yoko Ono’s art – good, bad or indifference – it is important that a recognised artist like her is reminding us that peace is possible, if we want it.

In a recent interview1, Ono, at 80 years of age warned that


“the biggest threat to our planet is our pessimism, and giving up the work to bring peace to our society.  If we don’t allow change, that is death.”

One hundred years after the beginning of the war to end all wars, let’s take up Ono’s challenge and decide that war is over, if we want it.