Oil and Honey (A Review) 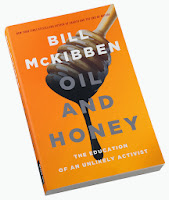 What a start to the year 2014: huge seas battering the UK coast, searing heat making parts of Australia almost unbearable, and much of the US frozen in a death grip.  Symptoms of climate change?  Very likely.

Timely then to review the latest book by one of the world’s leading climate change campaigners.  Bill McKibben is the founder of 350.org - the world-wide amalgamation of groups and individuals campaigning for action on climate change.  His latest book is Oil and Honey published in 2013.

The book is almost a diary of McKibben’s life over a period of two years beginning in 2011.  It chronicles his learning about bees and honey from a friend, and contrasts and compares this with his part in the effort to stop the Keystone pipeline1.  Hence, Oil and Honey.  It is an intriguing juxtaposition of the global and the local, the very large and the small.  Using these personal journeys Bill allows the reader to understand that all of us are up against a large global monster, but that the answers are small and local.

Yet, we cannot go straight to implementing answers, there are some huge changes to make first.  As McKibben so ably puts it:

McKibben’s association with bees allows for a couple of metaphors to be included in the book.  In one section he alludes to a book titled Honeybee Democracy, in which the author describes the democratic process in which bees decide on a location for their hive.  McKibben states that this process is “the exact opposite of how politics works in Washington” and thus, why “our elected officials have done nothing to make our earth more secure.” (p 79)

The basic reason for this inaction, according to McKibben, is because corporations won’t change.  They have a purpose, and only one purpose, so that all other considerations do not enter the thinking process.

The book gives us an insiders glimpse of life on the campaign trail of one of the world’s leading campaigners for action on climate change.  McKibben and others travel by bus throughout the US speaking at rallies and meetings, sometimes with many thousands in attendance.  From half a world away from the US it is heartening to know that there are people like Bill McKibben pressing for change in that country, for, without the US undergoing massive change the rest of the planet does not have much chance.

For that reason alone, McKibben’s book is worth reading.  For activists around the world it is also worth reading for the campaign ideas that it mentions.

Finally, it is worth reading for one of the very last pieces of advice from McKibben’s beekeeper friend, Kirk Webster, who in a conversation between the two of them, makes the telling observation that:


“For us to survive now we really have to put other living things ahead of ourselves.” (p 244)

He’s right, we are all connected and the sooner we realise this, the better.  Bill McKibben is also right, the sooner “…we fight this fight in the world we live in, not the one we hope to build,” the better. (p 21)

1.  The Keystone pipeline is proposed to be a huge pipeline carrying crude oil from oil sands in Alberta, Canada all the way across the US to the Texan coast refineries.  Massive opposition has come from environmentalists, scientists, indigenous peoples and farmers and landowners.
Posted by bruce meder at 14:43