Recently my first “guest blog” appeared on this blogsite.  “Cottoning On” received a number of visits and so I’m now posting Part 2 of Charlotte French’s commentary on the problems with cotton.  What follows is from Charlotte: 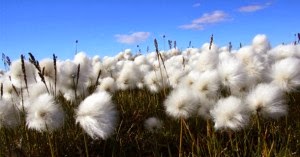 I have touched on the pesticide problem in growing and harvesting conventional cotton but of course there is also the manufacturing process.

Manufacturing cotton fibre into fabric and garments consists of several major processes – cleaning, ginning, spinning, knitting or weaving, dyeing, cutting and assembly, finishing, and cleaning.  Most of the chemical residues from the farming of cotton will be washed out.  However washing, bleaching, dyeing and printing processes in garment production will use a new set of chemicals classified by the WHO as moderately to acutely hazardous.

First, cotton gets cleaned up and then ginned.  In the gin the 40% fibre is separated from the 60% cotton seeds.  Cotton seed and various ginning by-products are used for animal feed and for human food, mostly in the form of cottonseed oil.  With conventionally grown cotton, the pesticide residues from the   concentrate in the fatty tissues of these animals end up in meat and dairy products.  Cottonseed oil is also a common ingredient in cookies, potato chips, salad dressings, baked goods, and other processed foods.    The ginned cotton now goes through spinning which is a mechanical process without anything added.  After spinning, the yarn receives a polyvinyl alcohol, after weaving the fabric is then bleached, either with hydrogen peroxide or a highly toxic chlorine.  Then it is washed or “scoured” with sodium hydroxide and finally piece dyed, often with formaldehyde-fixing agents.  An additional washing is needed to attempt to remove the formaldehyde-fixing agents.  A urea-formaldehyde product which cross-links molecules is often applied to reduce shrinkage and wrinkling.  “Finishing” is the final processing step for many conventional cotton garments to create easy care clothing that is soft, wrinkle-resistant, stain and odour resistant, fireproof, moth proof, and anti-static.

Chemicals often used for finishing include formaldehyde, caustic soda, sulfuric acid, bromines, urea resins, sulfonamides and halogens.  Unless clothes are 100 percent organic, you should always wash new clothes or bedding first before wearing or putting on the bed.

Of course there are other issues such as when huge US farmers get subsidised by their government and can keep the prices down.  That puts pressure on the smaller, non-subsidised farmers.  The smaller producers in places like India, West and Central Africa and Uzbekistan have trouble competing and then we end up with underpaid workers and child labour.

GM (genetically modified) seeds that seem to be an answer must be bought every year from Monsanto, who can put any price on their seeds.  On top of that there are the usual droughts and floods.  Growing cotton is a road with obstacles it seems and the demand for cheap and fast fashion doesn’t make it easier.

A little while ago the Greenroom1 was approached by a company to buy T-shirts from them (wholesale conventional cotton) for less than $5 each.  The Greenroom is, of course, only interested in organically grown cotton but the price astounded me, even for conventional cotton.  Once you have an idea of the journey from cotton seeds in the soil to a finished garment, a price like that doesn’t seem reasonable. Cheap for me, the consumer, must means it has cost someone else too much. (my emphasis, ed)

1. The Greenroom is the name of the shop/gallery that Charlotte runs with her husband (and artist) Wayne.  She retails eco-friendly fabrics and fair trade items from all over the world.  Wayne displays and sells his vibrant, ocean-inspired paintings as well.