For years (possibly as early as the 17th Century) traders in shares, currencies, commodities and various derivatives have used graphs and charts to track these items.  Many traders use these techniques (often known as Technical Analysis) to make their investment decisions based on those charts.

Today, the science of climate change is awash in graphs.  We see them everywhere; printed in newspapers, flashed on TV screens and dotted throughout articles relating to climate change.  Have those using Technical Analysis learnt anything that can help with interpreting climate change charts and graphs? 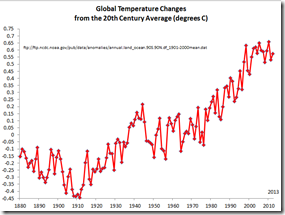 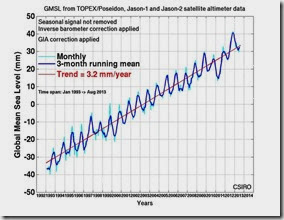 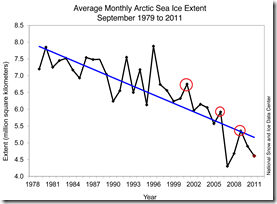 Graph A tracks the global temperature changes for each year from the 1880s until this year (2013). Graph B records the monthly global mean sea-level height from 1992 through to mid-2013.  Graph C shows the average monthly Arctic sea-ice extent in the years 1978 to 2011.

Confused?  Take a close look at Graph C.  On the graph I have circled in red the lower highs.  In each of the years 2001, 2006 and 2009 there were “spikes” in the graph.  But, the height of each of those spikes was successively lower than the height of the previous spike.  This is a classic example of lower highs indicating a downward trend.

Using similar analysis in Graphs A and B it is possible to identify a number of higher lows in each case: indicating clear upward trends.

What does this tell us?
It’s there, plain to see on the charts.  Technical Analysis, a well-founded aid to share trading and investment, has shown that global warming is happening and having an effect.

When are we going to see an upward trend in the determination by global leaders to take action?


PS I’m presently seeking feedback about this blogsite.  If you haven’t already done so, please take a couple of minutes to complete a short survey.  The link to the survey is at the top of this page to the right, under the heading “Feedback please.”  Thank you.
Posted by bruce meder at 14:10