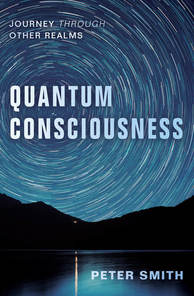 When he was about 14 or 15 years old Xiuhtezcatl Roske-Martinez made the astute observation that: “The biggest challenge we face is shifting human consciousness, not saving the planet. The planet does not need saving. We do.”1

The young environmental and climate activist was right then, and still is. We need to shift human consciousness.

Smith utilises concepts from within quantum physics to elucidate and explain the realms of consciousness open to us – if we are willing to take the journey.

Once this idea is recognised then the four key essences of quantum consciousness can be understood more clearly. Smith borrows four aspects from quantum physics and slightly re-words them for us non-physicists to understand. The Observer Effect becomes The Creator Effect, Non-locality becomes Everywhereness, Entanglement becomes Intanglement, and the Holographic Universe becomes Holographic Healing.

With these four key concepts in mind Smith takes us into the realms of: parallel lives, past lives, the power of beliefs, inter-connection, multi-verses, communication across distance and time, interdimensional consciousness, our role and place in nature, and other possibilities that many would dismiss as esoteric “nonsense.” Such dismissal is misplaced. It has been said that the mind is like a parachute – it only works when it is open.3 Quantum Consciousness shows us what possibilities exist, if we are open to them.

Smith is highly qualified to write this book. He has studied various forms of hypnotherapy and has been the President of the Michael Newton Institute for Life Between Lives Hypnotherapy – an institute with trained therapists in more than 40 countries around the world. He has many years experience in working with people in various states of consciousness, and utilises many of these cases to illustrate the concepts within his book.

Furthermore, Peter Smith’s writing style is straight-forward and easy to read. He expresses complex ideas in plain, uncomplicated, language. This makes it easy to grasp the concepts that otherwise might be difficult to understand.

This blog has a leaning towards a collective approach to how we live on this planet in a sustainable and amenable manner. Hence, I was delighted to read the final two chapters (Changing the Landscape of Planet Earth and, The Evolved Landscape of Planet Earth) wherein Smith addresses the links and correspondences between our individual consciousness and our collective consciousness, and how each helps the other to further evolve.

This is also a relatively short book (less than 200 pages) making it highly accessible to anyone wishing to gain further insight into what a shift in human consciousness might entail.

1. Xiuhtezcatl Roske-Martinez is the Youth Director of the environmental organisation Earth Guardians. In 2015, he and 20 other young people brought a lawsuit against the US government for failure to act against climate change. Although the court sympathised with the young people, the Court “Reluctantly (concluded) that this remedy (a government plan to phase out fossil fuels) is not within our constitutional powers.”

3. This quote is attributed to Frank Zappa, the enigmatic musician and composer.