Solstice For The Soul 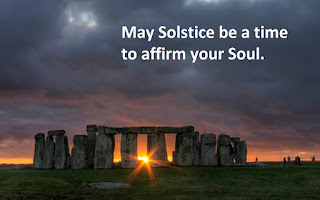 Today (21 June 2022) is the Winter Solstice here in the Southern Hemisphere (Summer Solstice in the Northern Hemisphere.) It is the day on which the sun (sol) appears to stand still (stice.) The sun appears to stop on its journey on the horizon towards the north. It is almost as if the sun is standing still for a day or so, contemplating the future: shall I journey further, or shall I return the way I have come over the past six months?

Viewed this way – as a time to stop and ponder and consider – perhaps we too could take a day or so to do the same. To consider our own soul, and especially how and where our unique soul fits within the world-soul.

To say that we rarely take such opportunity in this crazy, fast-paced, busy-busy world is perhaps stating the obvious. But, it needs to be stated. We need to stop and consider, and ponder.

How do we fit within the world-soul?

What is the world-soul?

Around 360 BC., Plato wrote one of his dialogues, Timaeus, and in it described the anima mundi (world-soul) and declared that,

“…we must declare that this Cosmos has verily come into existence as a Living Creature endowed with soul and reason [...] a Living Creature, one and visible, containing within itself all the living creatures which are by nature akin to itself.”1

The anima mundi (world-soul) then; is the life force, the animating principle, the very essence and soul, of a fully interconnected entity. A connected entity in which we all are a necessary and integral part, one in which the complexity and diversity is such that we conscious human beings cannot grasp the magnitude of this complexity. We can only gaze with awe and wonder at the mystery of it all.

Each of us has our own unique soul, even if we deny this, or do not actively seek or recognise it.

Centuries after Plato the Swiss psychologist Carl Jung further explored the anima mundi, and lamented our disconnection from the soul of the world. He wrote that,

“The development of Western philosophy during the last two centuries has succeeded in isolating the mind in its own sphere and in severing it from its primordial oneness with the universe. (Humanity has) ceased to be the microcosm and eidolon (image or representation of an idea – ed.) of the cosmos, and “anima” is no longer the consubstantial scintilla, spark of the Anima Mundi, World Soul”2

Perhaps today, as the sun stops to linger and ponder on its back-and-forth journey, we too, could pause and consider our soul’s place in the world-soul.