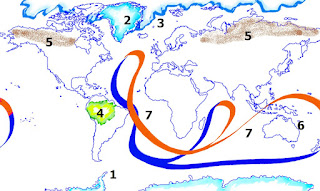 This is a brief Youtube clip introducing the Earth Tipping Points. I created this short clip to help a friend get a glimpse of the tipping points that are likely to send the world into environmental and social collapse. I had not intended to share it wider. However, she persuaded me that it was useful and should be shared wider. Most other videos, she told me, were either too long or highly technical; usually both.

So, the caveats on this clip.

The concept of Tipping Points is fairly recent. Malcolm Gladwell popularised the term with the publication in 2000 of his book The Tipping Point: How Little Things Can Make a Big Difference. We have, however, understood the phenomenon for a long time. We know it in the saying "the last straw to break the camel's back."

That saying is a useful one. It teaches us some of the lessons of tipping points:

I urge viewers of this clip to seek out further explanations and clarifications.
https://youtu.be/CehwkCNXOyU
Posted by bruce meder at 14:34