What Did You Do In The Peace (A short story) 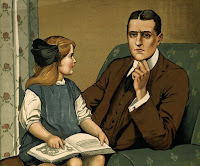 ‘Daddy, can I ask you a question?’

‘Daddy, what did you do I the peace?’

‘What do you mean Daughter? What peace?’

‘Well Daughter, I just lived, like everyone else. I didn’t do anything special.’

‘What do you mean “why not?”’ Father looked at Daughter with a puzzled expression.

‘Special Daughter? There was nothing special to do. We all just lived. You know – slept, ate, went to work. We just lived.’

‘But what, Daughter?’ Father was concerned now. What was bothering his daughter? Something was wrong.

Daughter continued, ‘But, if it was a peace, why didn’t it stay that way?’

‘Why Dad? Why did they collapse?’

‘I don’t know Daughter. They just did,’

‘Signs! Oh yes, there were signs I suppose. But no-one really took them seriously.’

‘Why Dad? Why did no-one take them seriously?’

Daughter considered this for a moment and then asked, ‘What was living like in the peace?’

‘It was great Daughter. We could go anywhere, do anything, buy whatever we wanted. Living was easy as an old song put it.’

‘But, but Dad.’ Daughter had a grimace on her face now. ‘Dad, what did you do? What did you do to keep the peace?’

‘We didn’t do anything Daughter. There was no need to.’

‘But Dad, didn’t you know? Didn’t anyone warn you of the collapse, and the wars to come?’

‘Well, yes Daughter. But it was all so far away, there was no need to get concerned. Besides, what could we do?’

Daughter gazed at her father intently, tears beginning to form behind her eyelids. ‘So Dad, are you telling me that during the peace you did nothing?’

Father glanced sadly at his daughter, then quickly looked away. He gave a glum nod.
Posted by bruce meder at 09:44