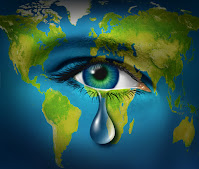 This is the first of a series of blogpieces seeking to understand our collective and individual response to social and environmental collapse.

The first warning bells sounded fifty years ago with the release of Limits To Growth.1 That ground-breaking study looked at several possible future scenarios based on projections of population. resource use, pollution, food per capita, and industrial output. One of these scenarios the authors termed the Standard model. Since 1972 this has come to be re-phrased as Business As Usual. Recent research and studies have shown that those warning bells rang true.2

We are at the limits to growth. We are nearing collapse.

Many reading this may think that I am speaking of collapse as resulting from climate change. I am…but so much more as well. To borrow a term from the climate change lexicon – we are facing a perfect storm.

This perfect, super, storm is comprised of: climate change, biodiversity loss, deforestation, soil depletion, pollution, water degradation, food scarcity, diminishing fuel reserves. Added to these are the more socially constructed harms of: political polarisation, mass refugee and migration movements, an ever-increasing chasm between rich and poor, techno-addiction, and loss of trust in so-called world leaders. All these, and more, are coming together simultaneously, to create unavoidable collapse.

Whether we know it or not, like it or not, this existential crisis gives rise to grief and mourning.

In 1969 the Swiss-American psychologist Elisabeth Kubler-Ross postulated five stages of the grief process. Her theories and ideas have little changed in the intervening five decades. Her five stages of grief is a useful model with which to dissect our collective response to existential loss. This first part will explore the stage of Denial. Further Parts will explore the other four stages: Anger, Bargaining, Depression, and Acceptance. A final Part will ask: what does it mean to mourn when faced with the potential extinction of the human species?

More recently, even some of the most recalcitrant of the world’s leaders have shifted and now, at least, acknowledge the reality of climate change.

However, the planetary system has shifted immensely in far less time than it took these leaders to change their minds. It has gone from Climate Change, to Climate Chaos, to Climate and Environmental-Social Collapse within just a few short years.

Collapse goes much deeper than simply Climate Change – it means death. A death of our way of life, perhaps even the death of our very existence on this planet. Such a thought is extremely uncomfortable – so much so that the most common response is denial. Indeed, denial is reasonable and totally understandable. Denial protects us from those uncomfortable thoughts and feelings. At least, it does so until such time as we are capable of moving on.

There is a danger in lingering too long in denial however.

When someone is faced with the death of a loved one, a person in denial wonders how they can go on, perhaps even questioning why they should go on.

Faced with existential death however, our collective denial shifts our response from one of ‘how do I go on’ to a stubborn ‘we will go on.’ Denying the possibility of the extinction of humanity we, collectively, say: it’s business as usual, we won’t change, we’ll keep on keeping on. And so, we will continue to extract minerals from the earth, we will continue to exploit nature for our own ends, we will continue to pollute the land, sea, and air with our waste. Denial says we must keep fuelling the industrial-consumerist machine in whatever way possible.

But!  Denial, ultimately, stops us from seeing the error and foolishness of our ways.

We cannot afford to linger in denial, for the longer we remain in denial, the closer collapse comes, and the harder the fall is likely to be.

Next week will explore anger and bargaining.

2. For example, https://www.livescience.com/collapse-human-society-limits-to-growth.html (accessed 28 July 2021)
Posted by bruce meder at 17:49