Down With Elections! - A Review 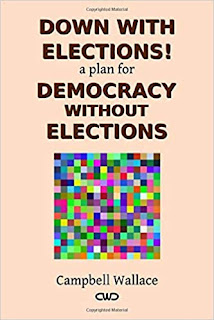 As you might guess, Down With Elections! by Campbell Wallace1 is damning not just of the electoral process, but of elections per se.  Tellingly, the subtitle of the book, A plan for democracy without elections,  tells us that this is not a manifesto to overthrow the institution of democracy.  It is not a call to arms, nor is it a voice for socialism, communism, or any other “ism.”  It is, simply, an outline of a mechanism to improve democracy.

Improve democracy?  How?  Didn’t Churchill claim that “… democracy is the worst form of Government except for all those other forms that have been tried from time to time.…”?  Yes, he did.  But he prefaced that comment by saying: No one pretends that democracy is perfect or all-wise.”  It is this preface that Wallace addresses in his book.

Indeed, Wallace begins the book by outlining 27 defects of democracy as we know it.  These defects all pertain to electoral democracy.  That is, each and every one of these defects is a defect of voting, of elections, not of democracy itself.

But, isn’t that democracy?  Doesn’t democracy mean elections and voting?  Are not they the same thing, mutually entwined?

No! says Wallace.  Democracy does not have to be wedded to elections, and nor should it.

What then?  Wallace has a simple answer: sortition.  Sortition meaning the random selection of decision-makers from the entire population.  That’s right.  The way in which we could select our parliaments, senates, congresses, city councils, and other such bodies is by random selection, meaning that anyone could be selected, not just those with the money, prestige, power, charisma, or education.

“Huh, nice idea,” we may cry, “but no-one has heard of it, so no-one will be in favour of it, and it won’t happen.”  Exactly.  Three pages before the end of his book, Wallace, notes this exact criticism.  His answer is perhaps obvious:

“The only real problem with sortition is the fact that it is not widely known and accepted, which is why I have written this book.”  Well done, Campbell Wallace.  This book is needed now, at a time when democracy all around the world is showing signs of aging.

Down With Elections! is part Manual, part Manifesto.  In it Wallace describes why it is that elections are not bringing us the results we would like (27 defects), explains what sortition is, and outlines a thorough implementation plan.

For those new to the idea, then the first four chapters and the last two are possibly sufficient reading.  Those who have come across the idea before and have assessed what it has to offer may be drawn more to Chapters 5-10.  In these chapters Wallace outlines in detail the make-up and practices of a nation state where sortition is the means of selecting decision-makers.  He addresses questions such as; how are bills proposed, what salary should selected members get, how long is their term of service, how many members should be selected?

Wallace also addresses some common criticisms, such as; will there be sufficient skill and knowledge in randomly selected bodies, won’t foolish decisions be made?  Wallace takes these criticisms seriously, and answers them with equal seriousness.

Has it been tried before?  Yes, it has.  In fact, it was Athens, the supposed birthplace of democracy, that first tried it out, and found that it works.  Wallace does not mention this until at least one hundred pages into his book.  This may be my only, minor, criticism of the book.  That sortition was used in the crucible of democracy is one of its most compelling features.  I would have liked to read that earlier in the book.

This book is a welcome addition to the growing body of works exploring sortition.