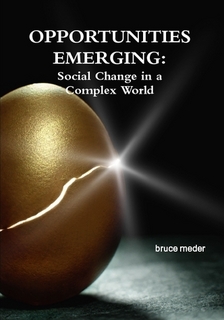 What follows is an excerpt from a book I am due to publish in May this year (2017).  OPPORTUNITIES EMERGING: Social Change in a Complex World offers a simple way of thinking about social change, how we act, the consciousness we bring to social change work, and the very process of social change itself.  Critical of traditional top-down, hierarchic, self-centred, technological approaches to social change this book suggests working with emergence.  Emergence is an aspect of Chaos and Complexity Theories and allows us to understand our role in the world, how we influence that world, and crucially, how we acknowledge our part in social change.  This excerpt is from the beginning of the first chapter and the start of chapter 3 and asks us to consider the many emergencies facing us in the 21st century.  I hope you appreciate this introductory snippet.

Closer to home, we read daily newspapers reporting on the growth in youth suicide, the obesity problem or the increase in rates of depression and anxiety disorders. These reports are worrying.
We don’t have to dig very far to notice that the amount of plastic in our landfills and our oceans is growing rapidly or that e-waste is now a concern. All worrying.

We look around our own neighbourhoods and communities. We see people living off the street, we see young men sitting outside the Courthouse on Monday mornings waiting for the bailiff to call them before the judge. We see elderly people, or people with disability, struggling to cope with the kerbing or the steps into buildings. If we think of what it is like for all these people, we get worried.

We look to our leaders; the Prime Ministers, Presidents and Premiers of nations. We watch as they debate the issues at Climate Change Summits, G20 meetings or within our own parliaments, senates and congresses. In our own cities and towns, we watch and listen to our mayors and councillors debating and deliberating in Town Halls and council chambers.

Then we really do get worried, because we realise that very few of our leaders have any idea of how to avert these emergencies or, worse still, have no interest in doing so. Many times we may even wonder if they are contributing towards the emergencies - grinning like the pale rider of death, racing full tilt towards the apocalyptic abyss.

Now we have another emergency to add to the growing list: our public decision-making institutions and bodies, or what we otherwise know as government. Democracy (or at least we call it that) is in a state of emergency. We don’t trust politicians, we are wary of the lobbying power of powerful, rich corporations; we are withdrawing from political processes by not voting and joining traditional political parties in fewer and fewer numbers.

In fact, with all the ills of the world only apparently getting worse and no-one seeming to care, it looks as if the world and we humans along with it are on the brink of a series of serious emergencies.
Is this our fate? To collapse from a multi-faceted emergency? Is there an alternative? Perhaps there is.

Emergence is an aspect of chaos and complexity theory. Although these theories arose within the mathematical and scientific arenas, they have useful insights for those working for social justice, community development and/or sustainability.

Emergence – what’s emergence? Let’s begin with a simple example that illustrates some of the features of emergence.

Everyone has heard of the elements hydrogen (H, oxygen (O and carbon (C). What do we know about each of them? We know that hydrogen is bitter, sour smelling, and explosive. We know that oxygen is tasteless, odourless and a vital ingredient of the air that we breathe. We know that carbon is also tasteless, inert, and cold.

Now, what would we expect to get if we combined these three elements like this: C2H5OH? (Those of you who understand chemistry, please put aside your acquired knowledge for the time being and assume that all you know is the properties of each individual element as outlined above). From our knowledge of each of hydrogen, oxygen and carbon we may expect to get a compound that is largely tasteless, perhaps slightly bitter, with a very faint smell. Knowing what we know about hydrogen we may want to be wary of the compound – it could be explosive.

But, what do we get? We get ethanol – an alcohol that most of us associate with wine, beer or spirits. The result of this particular mixture of hydrogen, oxygen and carbon is unexpected and unable to be explained by our knowledge of the individual elements. That’s emergence.

As well as being unpredictable, other features of emergence are that:

· It creates an order out of disorder,
· It is sensitive to initial conditions. Meaning that very small changes in the initial state can produce massively different outcomes. (Often known as the Butterfly Effect discussed in the previous section),
· It is often spontaneous,
· It is not simply the sum of its parts,
· It is often dynamic and continuously evolving,
· It is a bottom-up process, not a top-down one. The process is an emergent one rather than one that is compelled.

The book will be published in May 2017 and readers who may be interested in obtaining a copy will find more detail on this site when the time comes.
Posted by bruce meder at 21:40