The Brexit and Trump Eddies 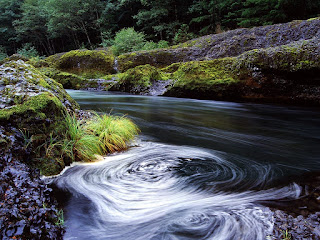 The Brexit and Trump votes have thrown progressive thinkers into a tizz.  What does it all mean?  How did this happen?  The social and humane progress of humanity has been shoved backward, according to many.

Yes, what does it all mean?  Sometimes when we consider nature we can find some insights.  One that comes to mind is the flow of a river.  If we sit and watch a river carefully for long enough we will notice a number of things.  We will notice that the river is not consistent – it changes from moment to moment.  We will notice that at one time it can be flowing quite smoothly, yet at other times turbulently.  It may be cold, or warm.  Sometimes there will be nothing upon the surface, and other times there will be a steady stream of tree branches or leaves.

Then there are the eddies and whirlpools.  Looking closely at these we notice that within them there are some sections that are moving contrary to the prevailing current, some sideways to it and others in a parallel movement.  Yet, it is all part of the same river.

A kayaker paddling down the river needs to be aware of these eddies and whirlpools.  The kayaker may try to avoid them but, if they get caught in one, they know that the worst thing to do is to fight against the eddy.

The Brexit and Trump votes are the eddies and whirlpools in the political flow.  And, similar to the kayaker and the river eddies, fighting against them is unhelpful, and possibly even dangerous.  It is far better to discover the nature of the eddy.  How did this eddy occur?  Is there an energy within it that may help us get out?

Lets ask ourselves how the Brexit and Trump eddies came into being.  A quick glance at the voting demographics of each is telling.  In each case the vote to leave the EU and the vote for Trump showed one overwhelming similarity.  The sectors of society that mostly supported Brexit/Trump were those with lower educational and income levels.1  Following these two demographics the next similarity was that older white men tended to vote for Brexit and Trump.

These groups are highly representative of those parts of society that have been left behind by neo-liberal globalisation over the past three decades.  Neo-liberalism rests on two major tenets: privatisation and deregulation.  Both have been disasters for those who were already in the lower socio-economic sectors of society.  The benefits have gone more and more to those who already benefit immensely from the social and economic structures that exist.  The wealth of the richest 62 people on earth is now greater than that of half of the world’s population.  Of the total global income growth between 1988 and 2011 the top 10% garnered almost half of it (46%).2

So what is it that the eddies of Brexit and Trump are telling us?

Both Brexit and Trump played to the worries of those most affected by neo-liberalism.  Both talked of the loss of jobs.  Both referred to a lowering of economic well-being.  In doing so, both tapped into the fears of those who have been badly affected by the globalisation project.  Brexit and Trump asked some questions that these sectors of society wanted to hear.  Brexit and Trump also supplied some answers; and therein is the real issue – they are false answers.

But to claim that people were duped would be a mistake.  People are rightly asking some questions and, largely, the only ones answering them are those like Trump.  Labour and progressive governments around the world have embraced neo-liberalism almost as much as have conservative governments.  In doing so they have abandoned those who in previous eras have depended on these governments to assist them.  The backlash was always going to come.  Now that it has, it is a pointless exercise attempting to blame the voter.

One thing that we can learn from the Brexit/Trump eddies is that we have to ask some fundamental questions.  Foremost amongst those is: is the neo-liberal project of universal benefit?  We can also ask: who benefits from neo-liberalism?  These questions have to be asked in the workplaces of the world, in the communities and neighbourhoods of those suffering the downside of globalisation.
Interestingly, of those who voted to leave in the Brexit vote, 69% said that they thought globalisation was a “force for ill,”  whereas only 31% of those voting to remain did so.  It seems that there is a tacit understanding of what is happening.

Finally, it is worth noting the irony in all this.  The neo-liberal globalisation project was ushered in by Margaret Thatcher in the UK and Ronald Regan in the US.  It is these two nations who have now supplied the backlash.

Notes:
1. Two-thirds of white people without a college degree voted for Trump.  More than 60% of those with a university degree or higher voted to remain in the EU – the opposite to those who ended education at secondary school ore earlier.