What to do when Technology is Inefficient? 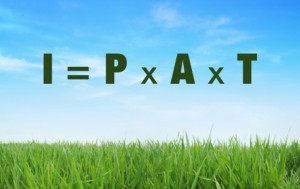 In the 1970s an explosion took place.  The modern environmental movement was kick started with some seminal works: Rachel Carson’s Silent Spring brought an awareness to the damaging effects of insecticides, herbicides and other such technologies.  E.F. Schumacher wrote Small Is Beautiful that helped us understand the costs of continuing on the same technological path and offered an alternative that had less impact.  Limits to Growth placed before us an array of scenarios for the future, one of which (the business-as-usual scenario) we continue to stubbornly follow today.  Limits to Growth has been shown more than 40 years later to have been uncannily accurate in its scene-setting.  All of these works are still highly relevant, mainly because we have learnt so little from them, and even less from the experience of forty years of history in the interim, particularly in the western-styled culture.

One further offering from the 1970s was a simple equation that has been largely forgotten in the debates on climate change, environmental degradation, soil and forest depletion and species extinction.  Simple it may be, yet it is extremely powerful in providing a fuller understanding of what is going on the world, particularly when we try to understand the impact we humans are having upon the world.  Here it is, in its simplest form:

I = PAT
What does it mean?  The equation expresses the human impact (I) upon the planet as a function of population (P), affluence (A), and technology (T).   Thus, our impact will increase if the population increases, or if our affluence and consumption increase.  If we can make technology (T) more efficient then that will have a lessening effect upon our impact according to this equation.

During the 1970s there was a lot of talk about the P component of this equation with zero population growth being discussed.  Today, most of the discussion centres on T – the technological component.  Increasingly efficient technological solutions are being produced and promoted everywhere.  Solar and wind power, hybrid cars, energy efficient light-bulbs and whiteware with 5-star energy ratings are all being  heralded as the technological breakthroughs that will reduce our collective impact.

In the 1970s there was little talk of the A component of the equation.  Today there is even less discussion of the A component.  Yet, it is becoming clear that the A (affluence) component is of great importance, possibly of fundamental significance.  It is becoming more and more so partly because the efficiency of technology does not translate into a lessening of impact as we would like to think it does.  That is because of the Jevon’s Effect  (also known as the Rebound Effect) – the phenomenon whereby when something is made more efficient it is consumed in greater amounts so that the possible advantage of greater efficiency is wiped out.  Much of modern technology shows this detrimental side to increasing efficiency.  Take these three examples for instance:

Undeniably the efficiency of modern cars is much greater than those built twenty or thirty years ago.  Yet this increased efficiency has had no impact upon energy consumption in total nor in per capita terms.  Indeed, energy consumption has increased dramatically, partly because the number of passenger-kilometres increased by 30% between 1990 and 2005 in affluent nations, with cars accounting for 87% of this.2  In Australia the number of passenger vehicles increased from 153 per 1,000 people in 1995 to 568 per 1,000 in 2013 – an almost four-fold increase in less than twenty years.  Statistics from the UK show a similar trend.  In the sixty years after the 1950s the number of households with at least one car jumped from just 14% to 75%.  These are all cases of the Jevons Effect.

Perhaps the biggest expansion in technological efficiency this century has come in the telecommunications field.  The spread of technologies such as iPhones, Smart Phones, tablets has been like wildfire upon the human landscape.  Facebook, Twitter, Instagram, Youtube and other social media technologies are ubiquitous.  The efficiency of communication has grown enormously.  Meanwhile, though, something else has grown in our social milieu – the rates of depression, anxiety and feelings of isolation in many western nations have increased.  We may be able to more efficiently “communicate” on one level, but on the level where it most matters, we are hopelessly losing it.

Renewable sources of electricity are becoming cheaper, more efficient, and easier to come by.  This should be good news shouldn’t it?  Yes, and no.  Yes – if we kept our consumption at the same level, or reduced it.  No – if it means that we consume more and more electricity.  Unfortunately, it appears that it is the latter scenario that is playing out.  The amount of electricity used in the world tripled between 1980 and 2015.  Per capita electricity consumption is expected to increase world-wide by 2030 with much of this being in the emerging nations of India and China, although no area of the world is exempt from this increase.3  This increased consumption comes at the same time as we are gaining efficiency via renewable energy sources.  Stanley Jevons would be saying “I told you so.”

That means taking a good, long, hard, look at the A component in the equation: I = PAT.  That’s uncomfortable isn’t it?  Because by taking that hard look we find that it means having to reach into our psyches and discover who we are.  We have to ask ourselves: who am I? who are we? what are we doing here? what is my purpose here?  Uncomfortable – maybe.  Difficult – definitely.  Fulfilling – yes (if we are willing to be honest with ourselves and each other).

Notes:
1. In 1865 Stanley Jevons wrote The Coal Question showed that when the amount of coal needed to produce a ton of iron was reduced by over two-thirds the total consumption increased ten-fold between the years 1830 and 1863 in Scotland.  The effect has been known as the Jevons Effect ever since.
2. Worldwide Trends in Energy Use and Efficiency, International Energy Agency, 2008.