Feminism Had To Happen

Feminism had to happen for men.  That is because feminism didn’t point the finger at men as a gender, it pointed the finger at a system called patriarchy.  Patriarchy, coming from Greek roots, means “rule of the father.”  The term patriarchy has been broadened to recognise that the rule of the father extends beyond the family to the state, to industrial and economic society, and into our cultural arena.  During the 1960s and 70s numerous books were published seeking to unpick how this system operated, who it benefitted, and who it oppressed.

Firstly, women rightly claimed, patriarchy oppressed women and benefitted men.  However, the system also oppressed - or at least marginalised - young men, gay men, men of colour, pacifist men, children, and nature.  Those who mainly benefit from the system of patriarchy are primarily older, rich, white men.  I know that this is stating a huge thesis in fairly blunt and simplistic terms.  I don’t have room for a thorough feminist-patriarchal analysis.  But, that is the basic mechanism of patriarchy.  Consider just three examples.

Take a walk amongst war graves.  Read the epitaphs and inevitably you will notice that the ages of these men are not old,  They are teenagers, or young men in their twenties, possibly into their thirties.  Who sends these young men off to war?  Older men.  Men of power and prestige.  Men with titles such as General, Brigadier, Field Marshall, or perhaps others with titles such as Prime Minister, President, Minister of Defence.  Inevitably, they are older men with authority.  Those young men lying in war graves are the victims of patriarchy.

The slave trade was abolished within the US and Great Britain only fairly recently in human history.  Who did that trade benefit?  The cotton plantation owners in the Americas and the owners of shipping companies.  Who did it oppress?  Men of dark skins from Africa – a continent considered to be backward by men of power and prestige in Europe.  Patriarchy oppressed those slaves.

I grew up in a society that said, often very clearly, that “boys don’t cry,” “put a brave face on it and face it like a man,” “don’t show your emotions.”  I was given cars, aeroplanes, trucks to play with.  When I played with stuffed toys I was looked at askance.  Boys don’t play with dolls – and stuffed toys are only one step away from dolls.  Possible careers for young men then did not include nursing and other caring professions – they were “for girls.”  In short, I was brought up in a culture where I was not supposed to explore my entire human identity.  Many emotions were off limits to me.  I was denied my fullness by patriarchy.

Patriarchy has always been oppressive.  Feminism, rightly, pointed this out.  Feminism had to happen.

Feminism still has to happen.  Today (2016) in the country in which I presently live (Australia) the average full-time wage for a woman is only 82 cents for every dollar earned by men.  In other words, a man could take the final 9 or 10 weeks of the year off on an unpaid holiday, and still earn the same as a woman who worked every one of the 52 weeks in the year.  The average superannuation payouts for women are less than 60% that of men in Australia.  Women make up less than one-in-five of the directors on the boards of the 200 largest companies in Australia.

Perhaps the most damning statistic is that domestic and family violence is the leading preventable cause of death, disability, and illness amongst women aged 15 to 44 years.

Women, particularly feminist women, have been pointing all this out for years - it’s not new.  A Vindication of the Rights of Women by Mary Wollstonecraft was published well over three hundred years ago.  Women have been telling men to listen all that time.  Women didn’t suddenly decide to become vociferous in the 1960s or 70s.  Fortunately, some men have listened, but many haven’t.  Some men, notably those belonging to the ill-named Men's Rights Movement, have rejected the basic tenets of feminism and so have come up with an analysis that totally misses the mark. 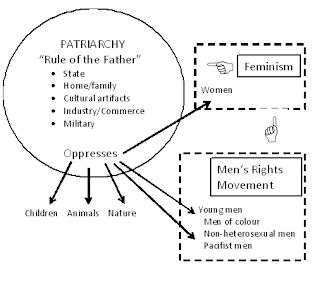