Evidence for the Machine 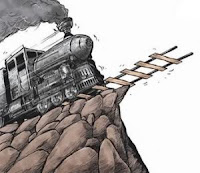 Last week’s blog post introduced the metaphor of a machine heading towards disaster, with the passengers unaware or unwilling to see the direction in which the machine is travelling.  The fuel for the machine in this metaphor is suggested to be our collective consumerism.

Consumerism
Waste
Results/Outcomes
It is worth reiterating the theme of last weeks blog:  It is time to question the machine.

1.  The Gini Coefficient is an internationally recognised measure of equality/inequality, with 100.00 representing absolute inequality, and 0.00 suggesting total equality.
Posted by bruce meder at 17:29