Global Is The New Local 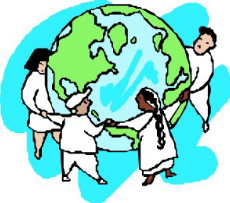 Many years ago the slogan Think Global, Act Local was coined within the environmental movement.1  The mass environment movement was just beginning and a number of global environment groups were coming into existence, amongst them Friends of the Earth, Greenpeace, and others.  Major issues of the time included fluorocarbons and the ozone layer, the proliferation of nuclear weapons, power plants and the attendant disposal of nuclear waste.  The extinction of animal species also elicited a fair amount of attention.  Plus, of course, the second part of the slogan – numerous local environmental campaigns.

Now, four or five decades later, and in the wake of the neo-liberal globalisation process, the global portion of that slogan is of greater importance.  The continued existence of humans on this planet could hang on how much we think globally.  And not just us – many animal species will suffer extinction if we do not think globally.

Thankfully, there are signs that a more global identification may be occurring.  Since 2001 GlobeScan has been conducting a world-wide study tracking how people in 18 countries (more than 20,000 people) identify themselves.  In 2016, for the first time, more than half the respondents in the survey identified themselves as global citizens.  The strongest global identification occurred in non-OECD countries, with citizens in Nigeria, China and Peru showing a higher than 70% agreement with the statement “I see myself more as a global citizen than a citizen of my country.”  What’s more is that the global perspective of citizens in non-OECD counties has been steadily rising since 2007 (when the average was 42%) to an average of 56% in 2016.  OECD countries on the other hand, have seen a reduction in global identification in the same period (from 47% down to 42%), although it has rebounded from the 2011 low of less than 40%.

However, not all OECD countries show low levels of global identification.  Spain (59%) and Canada (54%) buck the trend.

Certainly it can be argued that some aspects of globalisation have contributed towards this growing global identity.  Chief amongst these are those of communication, transport and information flows.  With the growth of the Internet and instant streaming of television images it is possible for people many thousands of kilometres away to witness the suffering of people on the other side of the world and find an empathy for them.  It is as though the suffering of people who are victimised by war, climate change effects, drought and famine are viewed as if they were living down the road from us.  Sufferers are no longer “on the other side of the world,” they are right there in our living rooms.  Because of global transportation systems we could be there within a day.

The emergence of global citizenship is a good thing.  Psychological tests suggest that those with a global citizenship perspective tend to score higher on traits of openness, caring, empathy, and agreeableness.  I am not suggesting that one follows from the other four, nor that the four traits follow from a global perspective.  Rather, I suspect, they emerge in mutual formation.

The world of today is highly inter-connected, full of diversity, and amazingly complex.  The issues, concerns, problems that face us are similarly so.  So too are the opportunities, wonders, and delights.  Those four traits – openness, caring, empathy, agreeableness – are vitally needed, as is a global perspective.

Thinking globally and acting locally continues to be a healthy, responsible, and creative slogan for our times.

Notes:
1. It wasn’t the first use of this or similar phrases.  It had been used within city-planning two decades earlier.  The first to use the phrase from an environmental viewpoint is debatable, although it does appear that its first use may have been David Brower (the founder of Friends of the Earth) in 1969.

2. The first recorded instance of someone thinking of themselves as a global citizen may be that of Diogenes in 412 BC.  When asked where he came from, Diogenes is reputed to have replied “I am a citizen of the world.”
Posted by bruce meder at 11:04