A Smile to Break the Ice 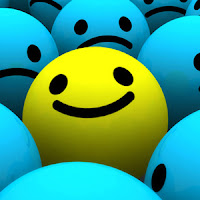 They’re called icebreakers – those quick, fun, active games that get thrown into workshops, seminars or symposia.  Some are used to deliberately interrupt a session to relieve possible inattention.  Some have a learning element.  Some are used just as the name suggests, to break the ice, and have a bit of fun.

What better way to break the ice than with a smile.  Smiles can be contagious.  Try walking down the road and smiling at people.  More often than not you’ll be rewarded with a smile in return.  Here’s a quick icebreaker game that uses smiles - and frowns.

1.  The facilitator asks participants to pair up.
2.  Once in pairs, ask the pairs to quickly touch one another on the shoulder.  Then announce that the person who was quickest to touch the other is person A and the other is person B.
3.  Have the pairs face each other.  Then announce that when you say “go” person A is to smile and person B is to frown.  Advise participants to keep their eyes open during the game so that they can see the face of the other person in the pair.  This game is best done without either person in the pairs speaking.
4.  Tell participants to relax and to allow whatever happens to happen, to not force anything.
5.  Say “go” and let the pairs see what happens.
6.  After half a minute or so announce the end of the game.
7.  Ask for feedback, comments, or insights.  Get a show of hands as to how many pairs experienced the smile passing from person A to person B.  Ask if the opposite happened for any pair (i.e. the frown passed from person B to person A).

There is a well known saying that advises


“smile and the world smiles with you, frown and you frown alone.”

In 1991 two researchers from North Dakota State University decided to test this age-long piece of wisdom.1`  They studied the likelihood of someone responding to a smile with a smile, a frown, or a neutral response.  They looked also at what happens when the subject is faced with a frown.  Their results showed a clear support for the wisdom of the ages.  Over 50% of their subjects responded to smiles with a smile.  However the likelihood of a frown eliciting a frown was significantly less – about 7%.

Both sexes responded to a woman’s smile with a smile themselves with about the same incidence.  However, if the smile originated from a man the likelihood that a man would respond with a smile dropped by almost one-half, whereas for women there was no noticeable difference.

Why the difference between men and women?  The researchers did not offer much speculation on this beyond suggesting that “although males are capable of intimate interactions, they choose not to.”  What is going on?  Is it an evolutionary throw-back to times when male leaders of a clan were unwilling to enter into an intimate interaction with other males for fear that they might be wanting to overthrow them?

If this is so, then men must seek to find the key that will allow them to find release from this trap.  The days of domination and hierarchies are dissolving and men must look to their consciousness and hearts to find ways to feel comfortable in a new reality.

Put a Smile in Your Bag of Tricks

Those facilitating community development or social justice processes have a bag-of-tricks that they go to for various situations.  This icebreaker game is one that you can pop into that bag and help to elicit some smiles in your workshops.