What If Hitler Hadn’t Invaded Poland? 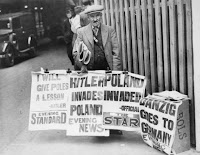 The world is connected.  We know that, or at least, we are coming to know that and recognise it for its importance.  Those working for social change recognised this reality when it was realised that methods and ends needed to be in harmony.  The social change mantra that “the ends justifies the means” was thrown out, never to be reconsidered.

Since then our understanding has further increased so that now we are beginning to recognise the full meaning of inter-connection.  We now understand that the consumer choices we make in the western world have an impact of worker conditions in the factories of China, or the fields of Africa.  We understand the incredible diversity and interconnections of various species in ecosystems.  Then of course we have our own technology.  Today, any one of us can be connected to almost anyone else in the world within a matter of seconds via our Smartphones, laptops or iPads.

Connection is not just between places, things, or people.  Connections extend over time.  When we think of our own lives we will recognise the truth of this.  When we were young we made some choices about whether to go to work, get educated, get married, travel the world or something else.  Those decisions connected us with other people, with other places, with other choices.  We made those choices, and they led to yet more connections.  When we think back we can recognise that all through our lives there were points at which we could have gone down an entirely different route than the one that led to where and who we are today.  Connections!

Yes, we all recognise them.  But, have we really thought through the full implications of interconnection?

Hitler’s invasion of Poland led directly to the outbreak of World War II, and with it the mass mobilisation of troops from many nations of the world.  It also saw one of the biggest refugee crises in history.  It is estimated that 60 million people died during the war – 3% of the world’s population as it was at the time.  Has there ever been such a massive impact upon the world population?

Even in those nations that were not the scene of battle the war had a tremendous impact on the way people lived, worked and moved.  Women became factory workers or were sent into the fields.  A fundamental shift in male-female roles took place.  Citizens moved to undertake work that supported the war effort.

Now, think of what sort of impact that had upon generations to come – all those Baby Boomers and the following generations.  Most people born after the end of WW II will have been born as a consequence (amongst others) of what happened in the war.  Many possible couples never happened – one or other of the couple (mostly men) were killed before ever fathering, or mothering, a child.  Men and women moved in droves from their hometowns.  Some even moving and remaining in other parts of the world.  They then met, and formed relationships with, people they may not have if they had not moved.

The question then is:  if it hadn’t been for the war, would your parents, or grandparents have ever met?  Would they have decided to have children?  Would one of those children have been you?
I’m sure that once you seriously think this through you will realise that the chances are high that you may not have been born if Hitler had not invaded Poland.

Does this mean that we should be thankful for Hitler, or that we should accept the atrocities that were carried out (on all sides I should add) during the war?  Of course not.  What this thought experiment is meant to do is show up that connections are not all rosy, charming, or ethical.  They just are.

The world and everything in it are intricately and immeasurably connected.  We never know what will emerge from some action.  What emerges is unpredictable, simply because it is impossible to map and understand all the causes and conditions that impact upon any action.  All we can do is accept things for the way they are.  Before I am accused of being fatalistic, let me reassure you that this is not my understanding nor what I advocate.  There remains a place for considered, thoughtful, ethical action.

Although this thought experiment picks out Hitler’s invasion of Poland to focus on, it could just as easily have picked out the first non-stop flight around the world (in 1949), or any number of events.  Then there are all those events that are particular to you: where your parents lived, what their occupation was, their education level, who their friends were, …

So, next time you hear anyone talk about how everything is connected, remind yourself that those connections include actions that we would rather forget about.  But everything in the past has had a bearing on the present.  The present is an emergent phenomenon of the past.


1. Instead there would be someone else reading this.  Furthermore, this blog may never have been written because “I” would not have been here.
Posted by bruce meder at 17:38