How Should We Think, Mr Einstein? 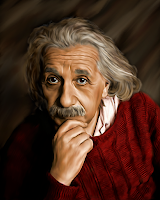 Albert Einstein is one of the most quoted historical figures: possibly the most oft quoted scientist.  One of his most famous quotations is,


“We can’t solve problems using the same thinking we used when we created them.”

It seems that Einstein never actually said this, although he was the Chairman of the Emergency Committee of Atomic Scientists who sent  a telegram to hundreds of prominent Americans in May 1946, in which the following phrase was mentioned:


“…a new type of thinking is essential if mankind is to survive and move toward higher levels.”

This telegram came in the wake of the dropping of the atomic bombs on Hiroshima and Nagasaki and at a time of heightened nuclear tensions.  Somehow that extract from the telegram came to be attributed to Einstein himself and re-formatted to the quotation about not being able to solve problems with the same thinking that created them.  Certainly, when Einstein was interviewed a few months later he reiterated the quote from the telegram and said to the interviewer (Michael Amrine)


“We must abandon competition and secure cooperation.”

Whatever the exact wording, or the circumstances at the time, the quotation that opened this blog poses a question.  What sort of thinking should we be using?  Unfortunately, Albert Einstein is no longer with us (he died 61 years ago this week) and we are unable to ask him directly.  However, we can get some clues from some of his other quotes and writings.  Here are just six modes of thinking that Einstein used and mentioned.

“Everything should be made as simple as possible, but no simpler.”  We  have a tendency to want to make things complicated, whereas often the best answer lies in simplicity.  Some professions thrive on making things complicated, with esoteric language and customs that help to exclude those not in the know.  Think of the legal profession, accountancy, politics, management – all maintain their power partly by creating a complicated system that others cannot understand.  Since Einstein’s death Complexity Theory has become an arena of scientific study.  But even here, we note that often the keys to unlocking complex situations are very simple.1

Einstein loved to play his violin and was an accomplished pianist, and often said that it was when lost in his music that some of his scientific inspirations appeared.  Contrasting imagination with logic, Einstein concluded that “logic will get you from A to B.  Imagination will take you everywhere.”

Einstein called the intuitive mind a sacred gift, whereas he called the rational mind a faithful servant.  Twenty years after Einstein’s death Robert Samples published a book2 that recalled how Einstein viewed the two minds and concluded, “It is paradoxical that in the context of modern life we have begun to worship the servant and defile the divine.”  Thus giving rise to another oft quoted saying but misattributed to Einstein.

“I have no special talent,” claimed Einstein, “I am only passionately curious.”  Indeed, it was his curiosity that led Einstein to his famous Special Relativity Theory in 1905.  Noticing that two apparent truths of science appeared to be contradictory, Einstein got curious and wondered why.  He realised that the reason was that both were based on an assumption that he proceeded to tear apart – resulting in his famous theory.

As children we continually ask questions, but eventually we lose that capacity when we get to school where we are taught that the answers are of greater importance.  Einstein disagreed saying that “The important thing is not to stop questioning.  Curiosity has its own reason for existing.”  Perhaps it was because of his desire to keep questioning that Einstein was expelled from school at the age of 16. His teacher claimed he had a “rebellious attitude.”

“A person who never made a mistake never tried anything new,” Einstein is reported to have said.  Many scientists and researchers will immediately see the wisdom in that phrase, and Einstein himself flippantly said that “if we knew what we were doing it would not be called research would it.”

For a man whose scientific output was crucial in the development of one of the world’s most powerful technologies – nuclear energy – it may seem odd that he would be sceptical of technology.  However, in December 1917 he wrote to his friend, Heinrich Zangger, that “All of our exalted technological progress, civilization for that matter, is comparable to an axe in the hand of a pathological criminal. ”  This was almost three decades before the destructive force of Einstein’s equations was unleashed in Japan.  In that same letter to his friend, Einstein laments the lapse towards amorality and says that “I come to value charity and love of one’s fellow being above everything else.”

Although Einstein did a lot of his work alone he was acutely aware of the interconnectedness of life.  “When we survey our lives and endeavours,”  he noted, “we soon observe that almost the whole of our actions and desires are bound up with the existence of other human beings.”

Einstein did not limit this thinking to humans.  “Our task,” he exhorts, “must be to free ourselves by widening our circle of compassion to embrace all living creatures and the whole of nature and its beauty.”

When we consider the problems that beset us today, arguably more complex and more interconnected than in Einstein’s lifetime, the wisdom of this last thinking aspect should become instantly apparent.  There are signs that it is becoming so.

Are these six modes of thinking part of the thinking that we are using today when facing our problems?  Amongst the world’s leadership I have my doubts.  However, at community level and amongst grassroots networks the use of this type of thinking is becoming more and more apparent.  The task of these movements will be to infiltrate our cultures, our decision-making bodies, and our institutions with these ways of thinking.

The last word, should be another quote from Albert Einstein.  This one ties it all together, and was written just one year before his death.  In it we glimpse a realisation on Einstein’s part that our thinking must look within for answers, rather than suggesting that our problems are “out there” and hence the solutions are “out there” also.  That is the real new thinking that we need.


“A human being is part of the whole called by us universe, a part limited in time and space. We experience ourselves, our thoughts and feelings as something separate from the rest. A kind of optical delusion of consciousness. This delusion is a kind of prison for us, restricting us to our personal desires and to affection for a few persons nearest to us. Our task must be to free ourselves from the prison by widening our circle of compassion to embrace all living creatures and the whole of nature in its beauty. The true value of a human being is determined by the measure and the sense in which they have obtained liberation from the self. We shall require a substantially new manner of thinking if humanity is to survive.”