Men: Lost or Lost Something? 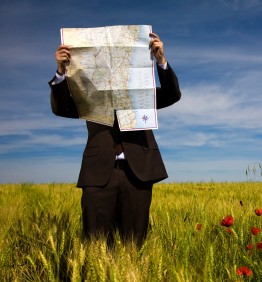 When I look around me I see young men looking lost.  I see them getting drunk, and then lashing out, fighting each other, and themselves.  Men all through the western world are the predominant perpetrators of violence, and mostly the victims of that violence.

Not only are men violent towards other men, they are also violent towards themselves.  Even though women suffer depression more than do men, males kill themselves at a rate three times that of their female counterparts.  In western nations suicide rates amongst men ranges between 10 and 20 per 100,000 men.  For women it hovers around 5 per 100,000 women.

Men too are much more likely to harm themselves through alcoholism.  The World Health Organisation (WHO) indicates that around 5-6% of men in most western nations suffer from alcohol use disorders, whilst for women the figure is 1-2%.

What's going on?  Are men lost?  Have men lost something in the post-feminism era as some would claim?  Are men no longer sure of their role in society?  Are men wandering around without purpose, without meaning in their lives?  Have men had the ground ripped out from under them?  Do men then lash out, at other men, or take it out on themselves by seeking refuge in drink, or killing themselves to end it all?

How can we become not lost?  Our politico-cultural myth-makers step in and provide us with answers.  Join the job market, get ahead, become the head of a corporation, beat your competitors to the market.  Work your way to power, and maybe die in the attempt.  That's one answer.  Another may be via the various violent sports, becoming a professional boxer perhaps.  That's another answer.

Yet another answer the myth-makers tell men (and increasingly, women) is to join the armed forces. In that arena you learn to be a man: learn toughness, learn patriotism, learn discipline, earn nobility.  Maybe even become a "hero."  That's another answer.

But, none of these are really an answer at all.  If the military was one such answer, why is it that far more serving or vet soldiers kill themselves than are killed "in action."?  The Veterans Association in the US estimates that up to 18 veterans kill themselves each day in the US.  That is considerably more per year than die in combat - more than the total number of active military personnel killed in active duty over the four years between 2007 and 2010.1

Are men lost?  Or have men lost something?

When boys and then young men look at the potential role models for men, what do they mostly see?  The men who are prominently displayed are those displaying the qualities of toughness, control and power.  The leaders of most of the western-styled nations are men.  The “captains of industry” are overwhelmingly male.  The sports stars that are promenaded across TV screens and in the sports pages of daily newspapers are male.  Tough guys all of them.  And powerful.

These boys and young men go to the movies and what do they see there?  Since 1950 the incidence of violence in the movies has doubled.2  Worse still, the amount of gun-violence in movies has tripled since 1985.  Once again the violent, aggressive tough-guy is portrayed as the male-to-be.

But then these young men turn into men and discover that they are not like that, or that trying to be like that brings no joy, no satisfaction.  They’re lost.  Lost in a world in which the male map is full of tough, violent, aggressive, powerful stereotypes.  Failing, many men give up and become shells of what they could be, retreating into drink or other harmful activities.  Or completely give up, opting for suicide.

Because men feel lost some look around for something or someone to blame.  Feminism is often a convenient scapegoat.  If it hadn’t been for feminism, the fabrication goes, men would still know their place in society; the male qualities of toughness, decisiveness and power would still have credibility and would not be called into question so often.  Men would not be lost.

But feminism is not the scapegoat.  Feminism could be the answer that men are looking for and the direction towards a society in which male qualities and female qualities are balanced.  The twentieth century feminists, such as Germaine Greer, were seeking liberation, whereas what happened is that women have become more equal with men, but still operating within a patriarchal system.  Someone once quipped that “feminism aimed for liberation, but settled for equality.”  Certainly, Greer herself said that “equality is an incredibly conservative aim.”

Feminism’s aim during the 1970s and after was not to equalise the number of women within male-dominated structures, it was to turn those structures upside down.  As such, the aim of feminism could have been of immense benefit to men, because those structures were not, and still are not, beneficial to men either.

Far from being the cause of men’s depression, suicide levels or alcoholism, feminism could be an ally towards healthy manhood.  But for feminism to be an ally, men have to re-discover their real male power and work in ways that help to turn upside-down the structures that are limiting both men and women.  Two male qualities are those of action and courage.  Men can use these qualities in ways that enhance the balance of male and female.  Men can use these qualities to heal the world, to heal each other and heal the rift between not only the genders, but also between nations, cultures and religions.

Men need not be lost.  Men can re-discover what has been lost.