Power of Supply and Demand

It stands to reason then that many climate change activists and others focus on energy when thinking about how to tackle climate change.  As I listen to many of these activists and others the discussion often leads to alternative, sustainable, non-fossil based energy sources.  Solar, wind, tidal and other sustainable sources are mentioned.  Switching from fossil-based sources for electricity production is definitely needed and is needed quickly.

However, such discussion and the solutions suggested, focus only on one side of the supply/demand curves so favoured by economists.  Encouraging and advocating for sustainable sources looks only at the supply side.

The problem however, is mainly one of demand.

Demand is far from equal too.  Like many things in the world, the consumption of electricity is highly inequitable.  The rich nations demand and consume at a much faster rate than do poorer nations.  For example, in 2012, the per capita electricity consumption in the US was 12,954 kWh.  Australia was not far behind consuming 10,398 kWh per person.

The Least Developed Nations1, however, consumed just 184 kWh per person.  China saw the largest growth in consumption, up a staggering 2100% in the 40 years.  At 3,475 kWh per capita, it is still consuming less than half that of the rich nations of the world though.

The problem is demand.

That demand doesn’t look like abating either.  The World Energy Council forecasts electricity demand to more than double through to the year 2050.2  If that demand is going to be met by renewable sources, then those sources will have to increase supply by more than ten times their present rate.3  Possible?  Yes!  Likely? …Mmmm…

The problem is not going to be solved on the supply side.

Attempting to solve issues such as climate change by addressing the supply side is easy in a psychological sense.  All that needs to happen is for our brightest brains to invent better, sustainable, renewable technologies, and make them affordable for people.  That, psychologically, is easy to deal with as the solutions are external to us.

The demand side is not so easy though, is it?  To address demand we must necessarily look at ourselves.  We must look at our lifestyles, we must address our basic desires, fears, wants and needs.  We must question our consumptive lifestyles, especially those of us who live in western-styled, rich nations.  Consumption and electricity use go hand-in-hand.  The following graph charts electricity use per capita versus GDP per capita by country.4  As can easily be seen, there is a clear correlation between the two.  The higher the GDP is then the greater the electricity use (or vice versa).  It is also clear that the western-styled, rich nations (those marked with red squares) are more likely to have a greater electricity use. 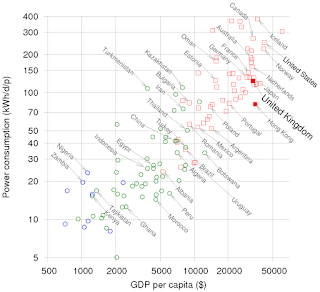 It is abundantly clear.  Electricity demand is where the problem lies.  It is also where the solutions must come from.  We can continue to seek out sustainable, renewable sources – and we must – but until we take seriously the demand for electricity then we are not going to solve the problem.  That means that we must understand and address our consumption.

1. The Least Developed Nations are 48 countries with a combined population of over 850 million.
2. World Energy Scenarios: Composing energy futures to 2050, World Energy Council, 2013.
3. The US Energy Information Administration estimates that 21% of electricity generation was from renewable sources in 2011.

4. Although there is discussions and research being undertaken to devise a better measure of consumption, GDP remains the most accessible and global such measure.
Posted by bruce meder at 20:53