One of the important rules of mathematics that we learn early in our school life is that both sides of an equation must balance.  For example 2 + 2 = 4, or 6 x 5 = 30.  When the equation doesn’t balance it is known as an inequality.

Let’s apply this basic understanding to this equation:

It doesn’t balance does it?  It’s an inequality.

What do these figures represent?  Let’s take the left hand side of the equation first.

The cost of supplying clean and safe water and sanitation to everyone in the world is estimated at $22.6 billion each year for five years1.

The cost of eradicating extreme hunger is estimated at $30 billion per year.2

The extra money needed annually to provide access to primary education for all children is estimated at $26 billion.3

The cost of preventing HIV/Aids is estimated at $24 billion per year.4

The cost of first line treatment of malaria is estimated at $5.9 billion.5 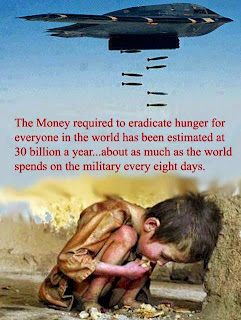 The cost of providing universal maternal health care in developing countries is estimated at $24.6 billion.6

The cost of saving the deaths of two million children each year from pneumonia and diarrhoea is estimated to cost $6 billion.7

Talk about an inequality.

The nature of estimation is, of course, open to debate and error.  However, it cannot be argued that even considering that there will be errors, the inequality is glaring.  So too is the immorality of it.