Why So Many Community Groups? 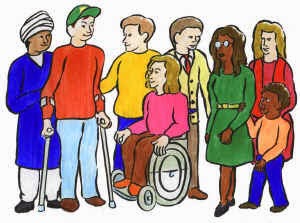 Community groups are everywhere you look.  There are groups working with the homeless, those with disability, the unemployed.  There are support groups for head injury, survivors of sexual abuse, parents of children with autism.  There are advocacy groups championing environmental causes, prison reform or the plight of refugees.

In many cities in the western world there are general community development groups attempting to build communities within particular suburban areas.  Often there can be more than one, sometimes several, such groups all working in the same geographical area or issue.

Why so many?  Surely they can get together, pool resources and hence become more efficient?  I hear these questions frequently from politicians and government bureaucrats.  If there weren’t so may groups, they argue, there wouldn’t be the same call on “our” funds to support them.

The questions are completely rational – if you start from the assumption that efficiency is the be all and end all of community organisations.

The term Global Civil Society has been with us for approximately twenty years and describes a society in which all the above aspects of life in society are upheld, promoted and respected.

Civil society (at least in the west) has long been bound up with the concept of the Social Contract and hence with the State.  All that began to break down in the 1960s and 70s in Eastern Europe and South America.  In western nations a sense of unease about the role of the state was also underway, especially within the feminist, anti-war and anti-apartheid movements.

With the collapse of the Iron Curtain and the ousting of military dictatorships in South America the ideas surrounding global civil society began to grow.  In the west, the emergence of globalisation helped to engender a more robust critique of western society and a willingness to look within.  When western thinkers and activists did look within their own societies they found monsters that they didn’t like.

In the US particularly, Robert Putnam1 found that American communities were losing their connectedness.  They were losing social capital, even though economic capital was growing at an enormous rate.  Others were finding that within their own societies there were alarming levels of racism, child poverty, environmental degradation and marginalisation of minorities.

The idea of the state being the provider and arbiter of all things, via the social contract, began to look unsustainable.  Community organisations, non-government organisations (NGOs) and non-profits increased in numbers.

Identifying and counting community organisations is akin to counting bubbles in a bathtub.  There are so many and they come and go as quickly.  However, the group Open Democracy has been tracking International Non-Government Organisations (INGO) over the past two decades and have found a steady increase in the numbers.

Why so many groups, then?  Simply – because they are necessary.  They are necessary if we are wanting a society in which people can feel actively engaged and able to participate in the decisions and mechanisms that govern their lives.

Such a society must be our continual quest.