The Youth Of Today 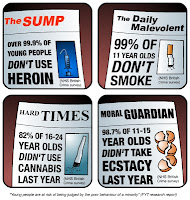 “The youth of today…”  How often do I hear those four words begin a bemoaning of youth.  Often in the same speech can be heard words such as “In my day…” or “When I was that age…”  So, I thought I’d find out what the image of youth is.  I did a little research into some newspaper headlines.  Here are just a few:
Nor is it limited to headlines.  Looking at a couple of editorials we find examples such as:
Yes, it seems that young people are; immoral, out of control, disrespectful, violent and in need of education.

But, before we start lamenting the past and complaining about the young of today let’s take a closer look at those headlines.

Number 1 is a headline from the Sydney Morning Herald, dated 12 November 1975.  The second comes from the New York Times on 3 July 1944.  The third, again from the New York Times, this time in August 1954.  The fourth one you might have expected to be from the 1960s, but is actually 5 December 1928 in The Advertiser (Adelaide).  The fifth headline appeared in a Rockhampton newspaper (Morning Bulletin) on 28 February 1940.  The final headline, about the increase in gang activity, is from the Examiner of 6 August 1949.

As for the two sentences from newspaper editorials, the first was written in May 1964 in the Birmingham Post (UK) about the fighting between mods and rockers.  The second comes from well over 100 years ago, a British newspaper of 1898.

So, before we (the older generation1) bemoan the youth of today, let us recall that our parents said the same of us, as did their own parents before that.

Nor is bemoaning the youth of today a recent phenomenon.  Many of us may have come across this quote before:


“Our youth now love luxury. They have bad manners, contempt for authority; they show disrespect for their elders and love chatter in place of exercise; they no longer rise when elders enter the room; they contradict their parents, chatter before company; gobble up their food and tyrannize their teachers.”

It is attributed to Socrates (c. 469 BC – 399 BC), although it has been given a more modern vernacular.  It sounds so up-to-date though doesn’t it?  Here are a couple of more quotes from many years ago:


"The young people of today think of nothing but themselves. They have no reverence for parents or old age. They are impatient of all restraint... As for the girls, they are forward, immodest and unladylike in speech, behaviour and dress."  - Attributed to Peter the Hermit, AD 1274

"We live in a decaying age. Young people no longer respect
their parents. They are rude and impatient. They frequently
inhabit taverns and have no self control."

That last quote is an inscription found on an Egyptian tomb, 6,000 years old!

1. I am one of those “older generation” having been born in the middle of the post WW II Baby Boom.
Posted by bruce meder at 14:49